We have a little bit of the Time Machine going on this year.  It was a favorite movie but I never thought that I would become part of the story.  We have only jumped into the machine and sped about three weeks ahead but it is still not a normal feeling to see everything in your garden out of sync. 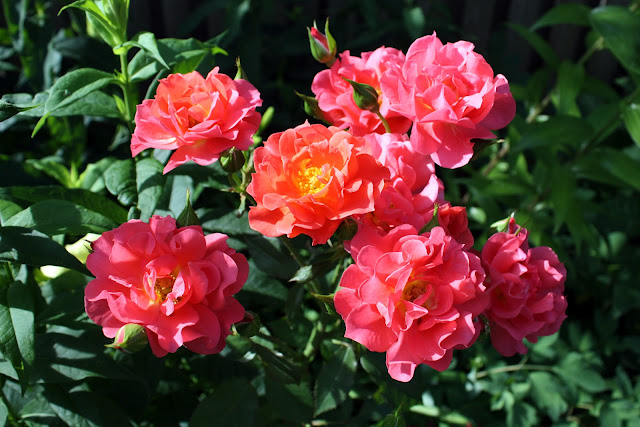 Cinco de Mayo
Most of the roses are done with their first blast of color.  This one had a cane left that burst into multiple blooms.
The Japanese Beetles have been fooled for now, very few rose petals to feed on.  However, they are many new blossoms forming, can we outrun them? 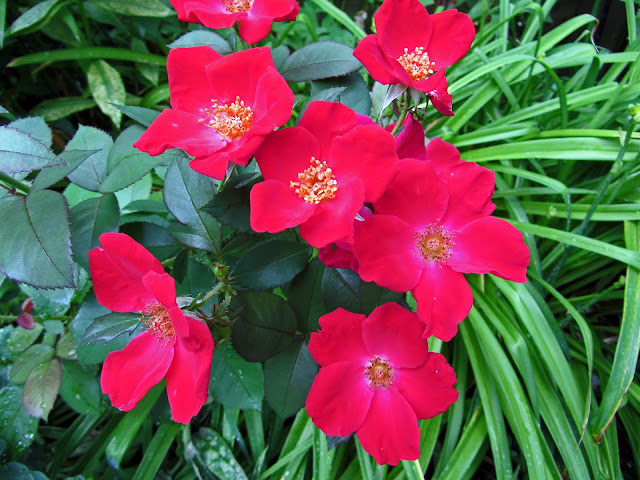 Home Run rose seems unattractive to the Japanese Beetles, another plus for this shrub rose! 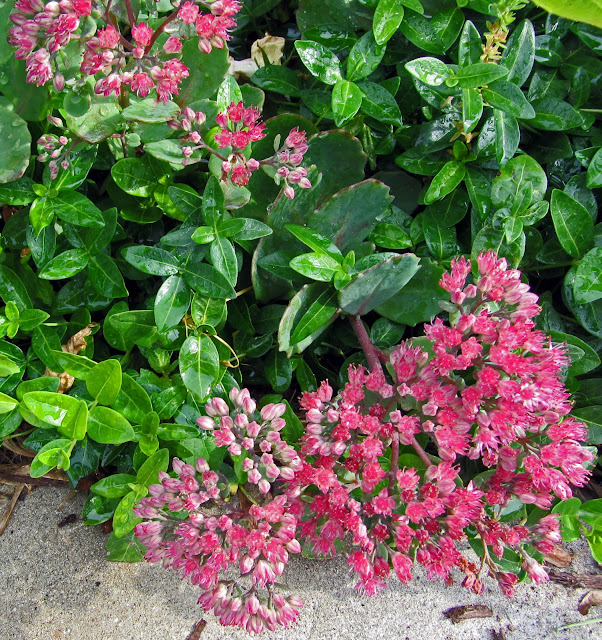 Sedum Vera Jameson is a June surprise, never blooms this early, but it certainly blends in beautifully with all of the summer flowers. 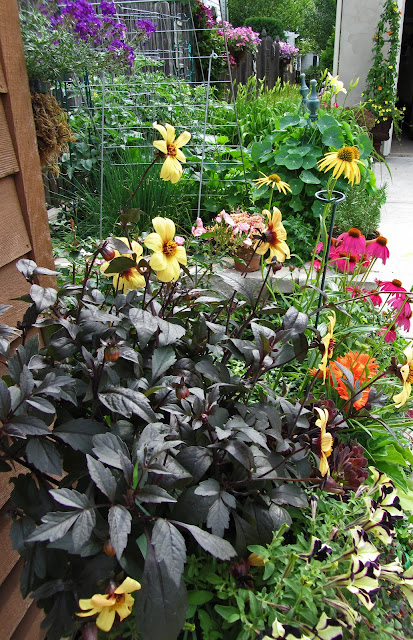 Black is acceptable in my garden in small doses, have to use bright colors with it like Phantom Petunia. 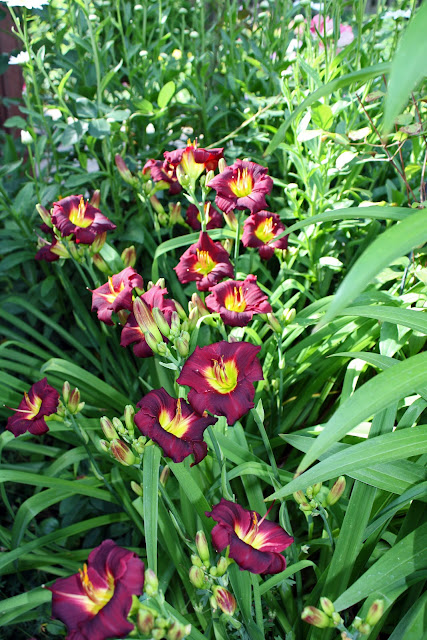 Dark Ruby Daylily
This is still a difficult daylily to use in the garden, much darker than when photographed.  It needs to be mixed with very light flowers, white, yellow, etc. 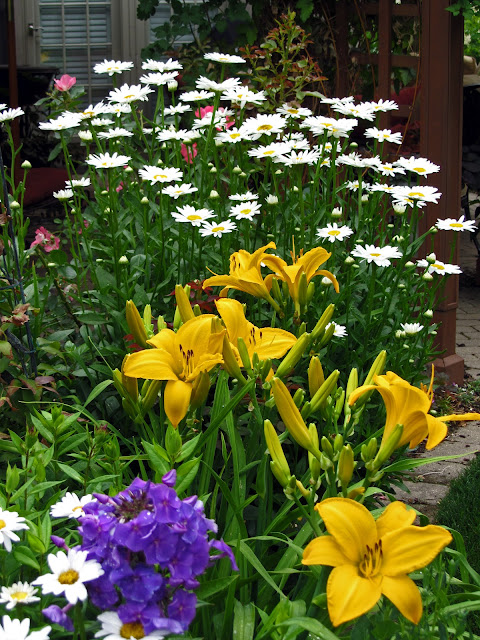 Eileen Clymer is an early daylily and is now blooming with Blue Paradise Phlox and Becky Shasta Daisy. 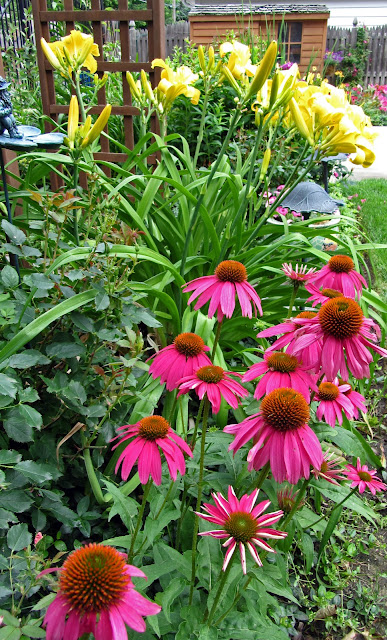 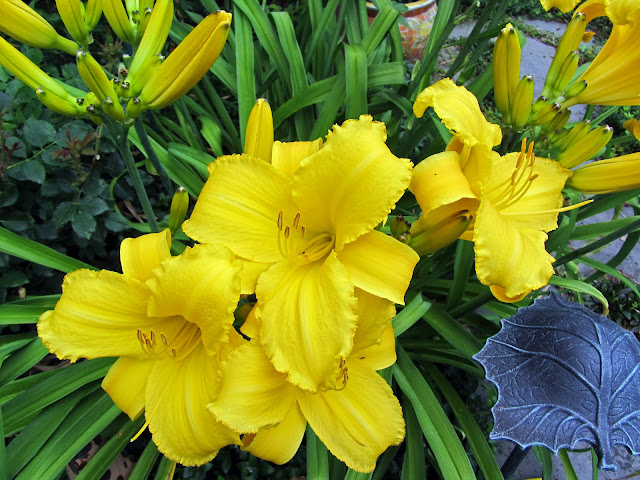 Mary Todd Daylily
This one is a winner from way back, can't be without it, but does need to be divided more often than some other daylilies (about every four years). 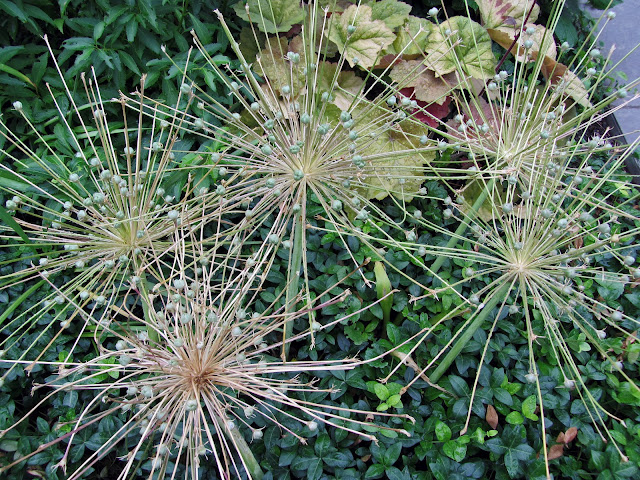 Allium Schubertii
This is a great bulb (like stars in the garden) but does not always come back, or if it does it is smaller.  So, at least for me it is one that probably should be planted each year. 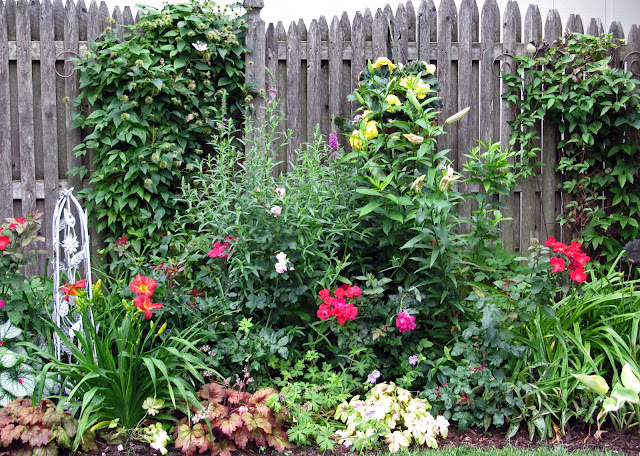 The south border has been devoid of annuals this year with perennials taking up the front area totally.  The Heucherellas are very colorful and the Brunnera Jack Frost continues to stand out through the summer. 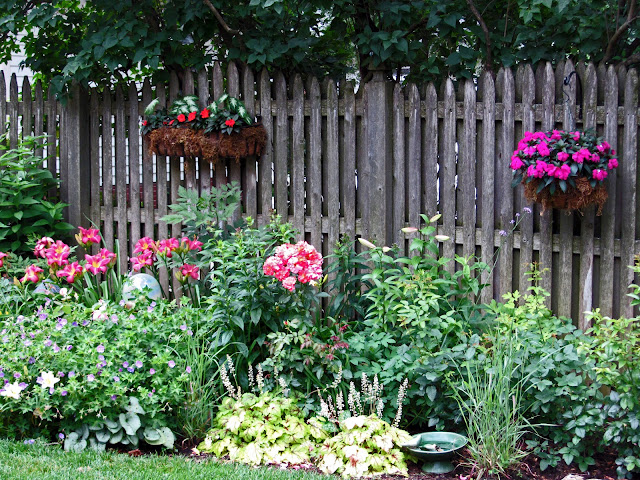 This is the other section of that south border, sun in the front shade in the back.  You can see how the fence baskets contain shade plants and the back of the border shade tolerant perennials. 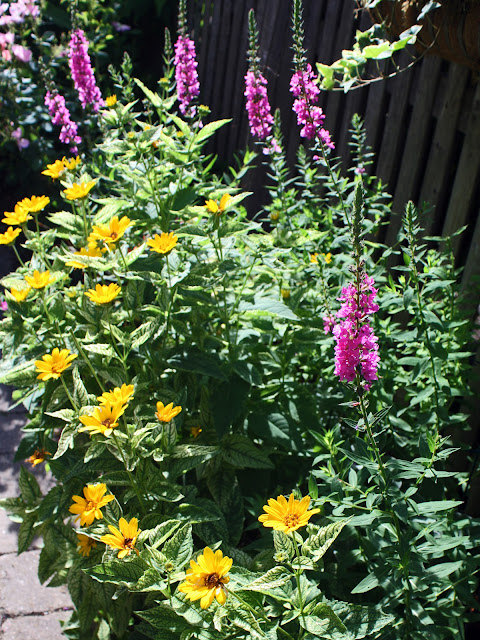 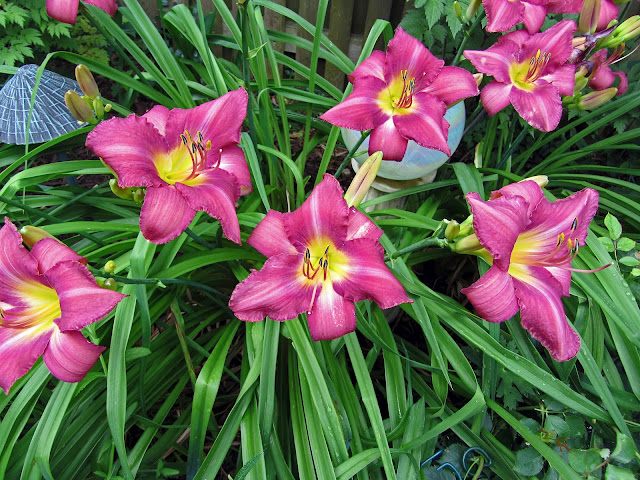 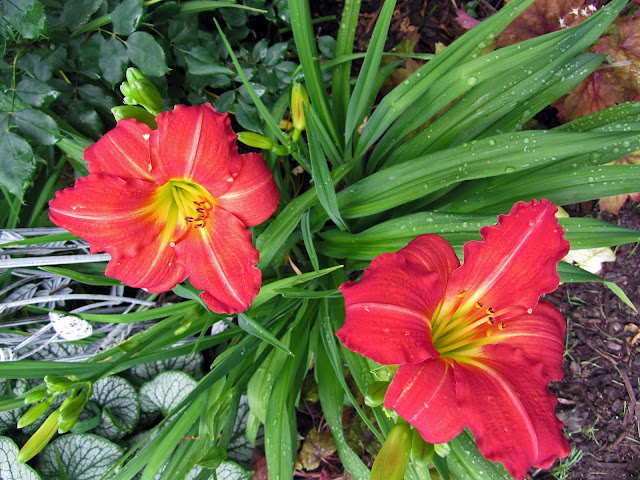 Red Rum Daylily
This is a shorter daylily with a large flower and looks great in the front of the border in the south garden. 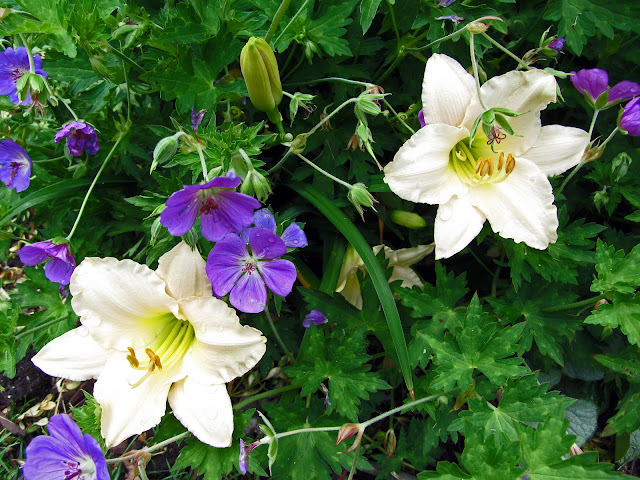 Lullaby Baby Daylily
This is another shorter daylily peeking out from Rozanne Geranium. 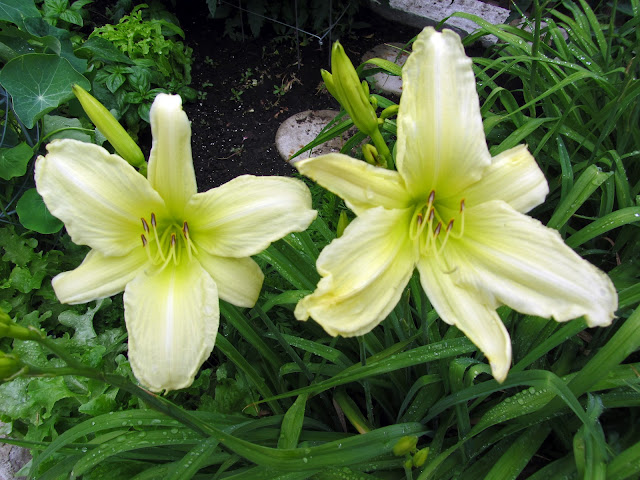 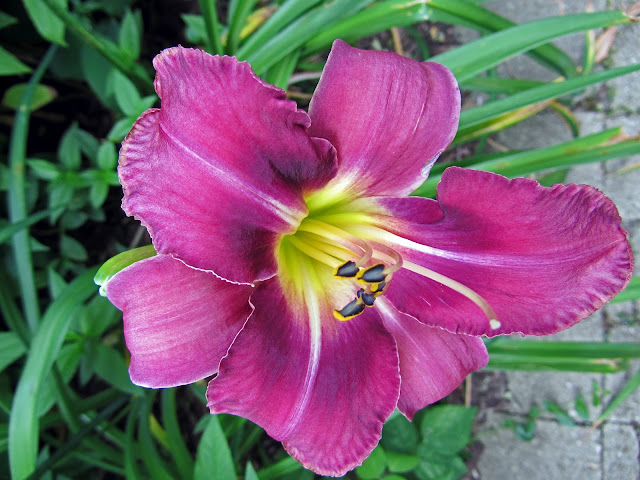 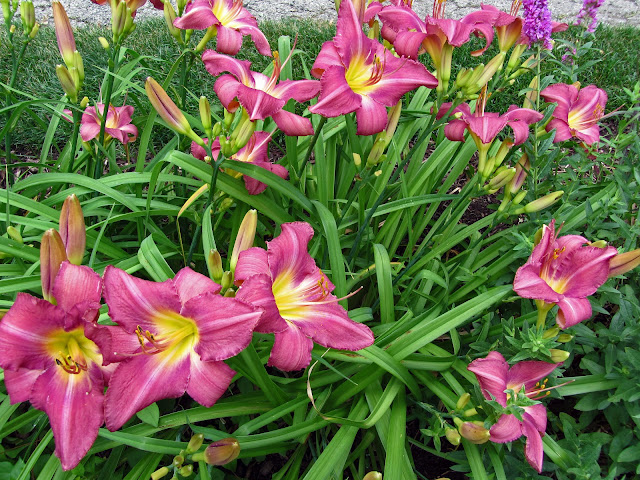 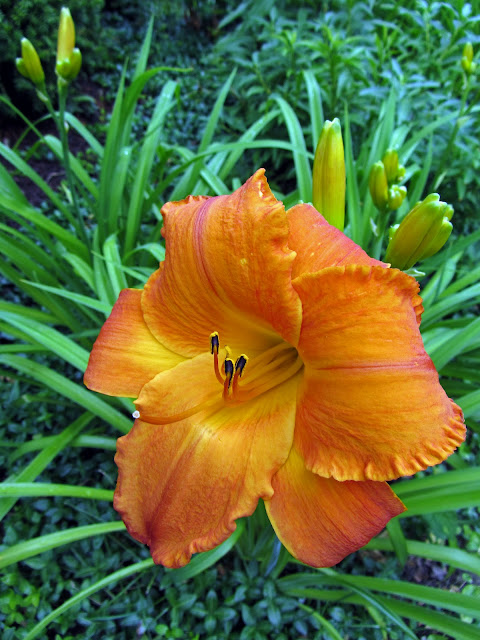 Maua Loa
I planted this daylily last year, not too many scapes yet, and is just beginning to bloom in the front garden. 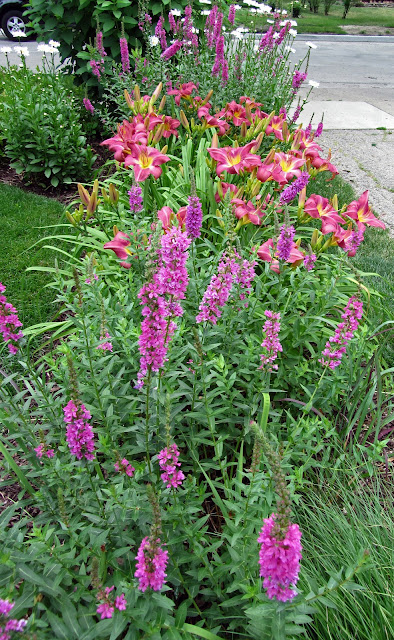 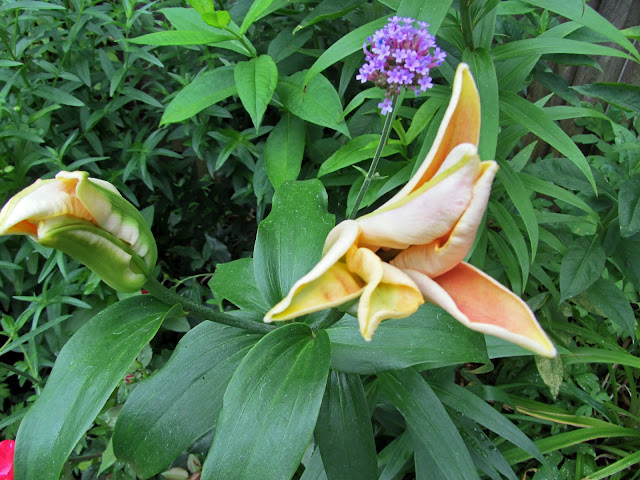 Some of the lilies suffered from frostbite but I think they will look okay. 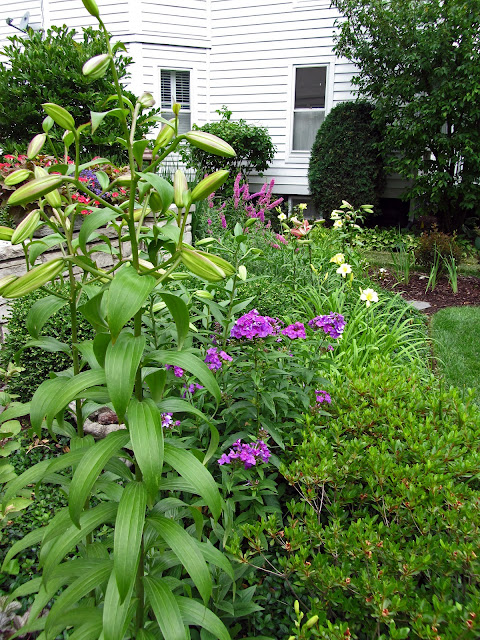 Height is a concern with some lilies.  These are free standing but I have some that require support and then some! 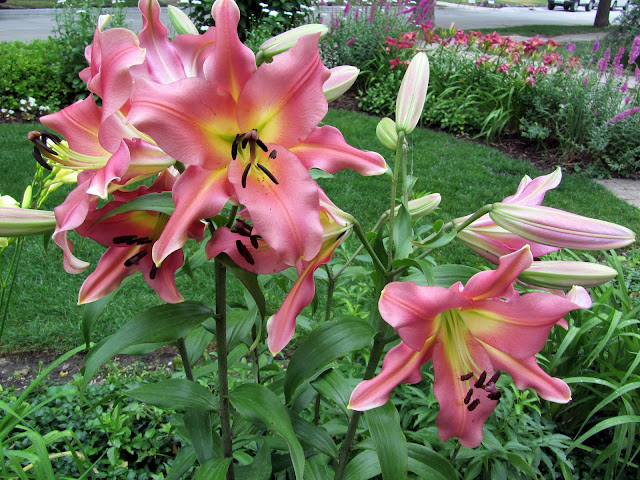 Orienpet Satisfaction
This is a free standing lily and the fragrance is intoxicating. 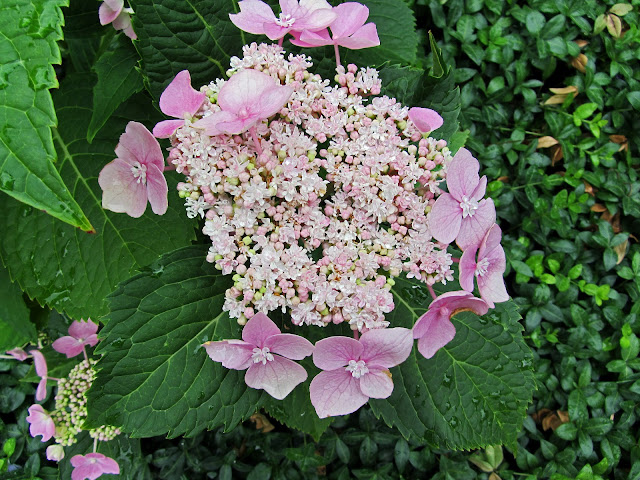 Starlight Hydrangea Let's Dance
I had expected blue like the three I had put on the other side of the walk, but these were pink, fertilizer didn't make any difference.  Now, I actually think I like the pink better than the blue.
Hopefully the roses will bloom again, more dayliles to come, wonder if all of the fall plants will bloom in August?
Posted by Gatsbys Gardens at Sunday, June 24, 2012 22 comments: