Cutting It Up In The Garden

I received a very generous gift certificate from my family some months ago to use at one of my favorite garden centers.  It was too late in the season to use it so every once in awhile I would look at it in my wallet and think soon, soon!

Well, the other day, I decided to do a little pre-season shopping.  I bought the large bag of Espoma Organic fertilizer, a general garden fertilizer that I broadcast throughout the beds each spring.  I also treated myself to some Felco pruning shears which I sure hope I don't lose in the garden. 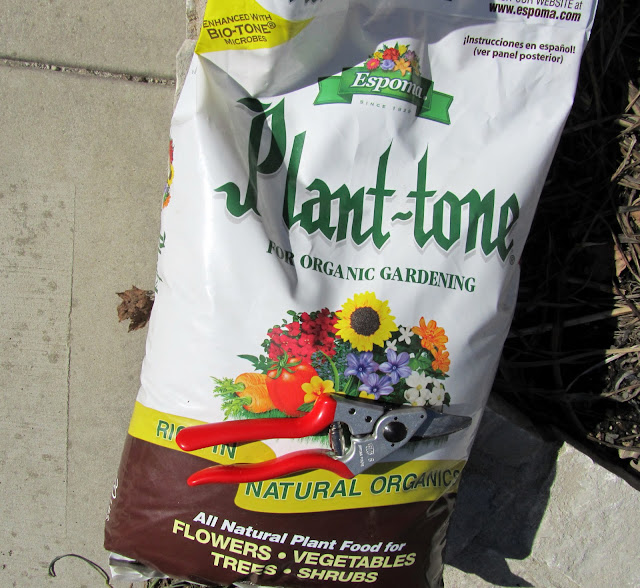 I am ready to begin pruning the roses, looks like the rabbits have done this for me on some of them.  The Meidilands really grow tall with curved branches during the summer and need to be shaped or they would take over the pathway.  I made the cuts on a 45 degree angle facing outward from the center about 1/4" above a node, cut stems aways from the middle of the rose and thin out all of the spindly stems, leaving some strong canes.  Also, cut out all of the dead canes to the ground. 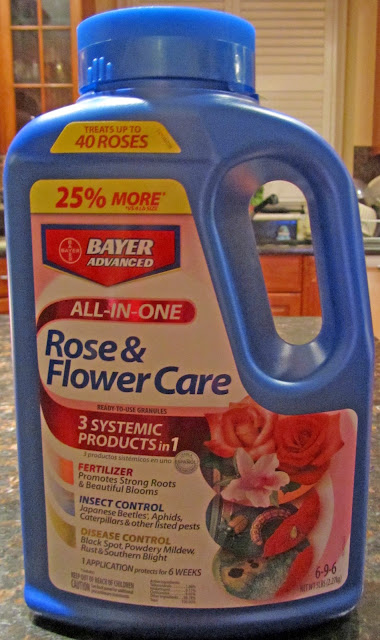 This is a new product that I found at Costco.  I have used Bayer for many years but this is the first year that their product has advertised its use against Japanese Beetles.  It is about double the price of their other systemic rose care but if it works it is worth it!  Right now I have one blooming season for my roses, June, and then the Japanese Beetles hit. 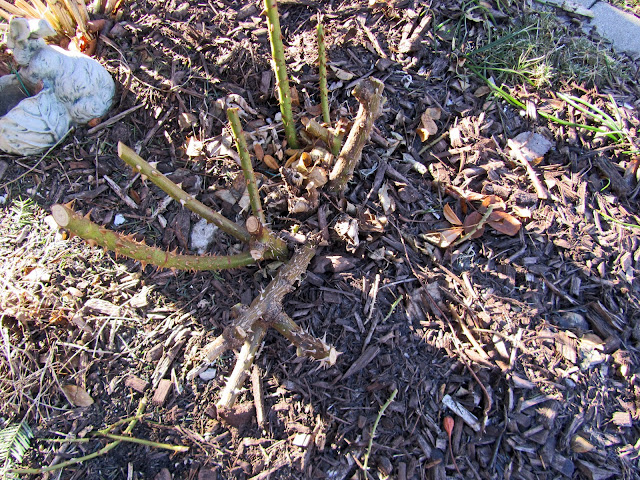 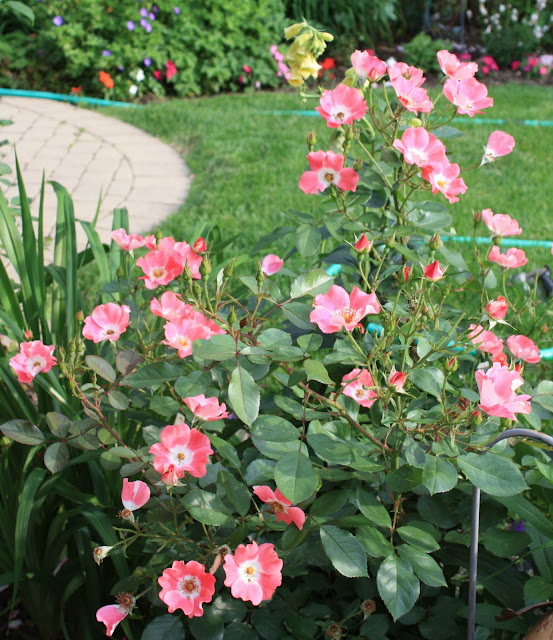 Pink Meidiland Rose
The Knockouts and Rainbow Knockouts really become very bushy during the season but rebound quickly with a severe haircut.  You can leave them with minimal pruning because they are shrub roses, but on my property, they will quickly get out of bounds.  It is also helpful to open up the middle for air circulation and to let in light for more blooms. 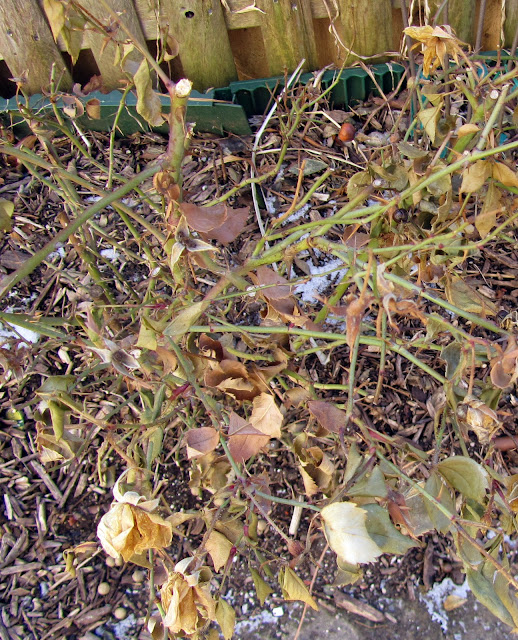 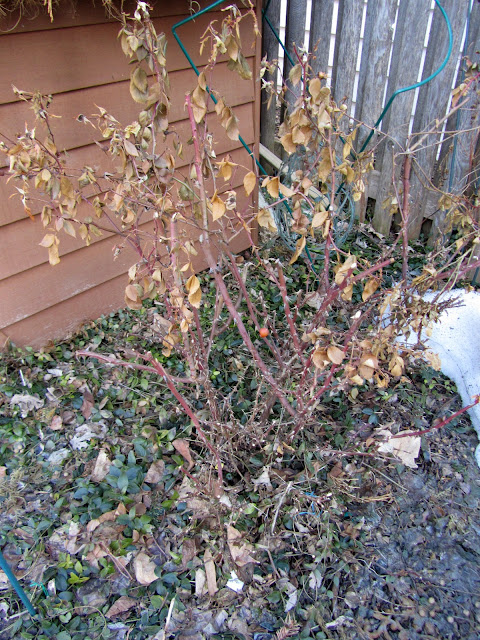 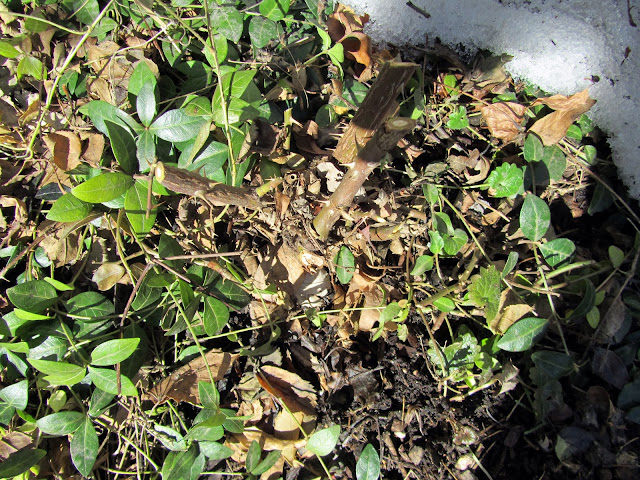 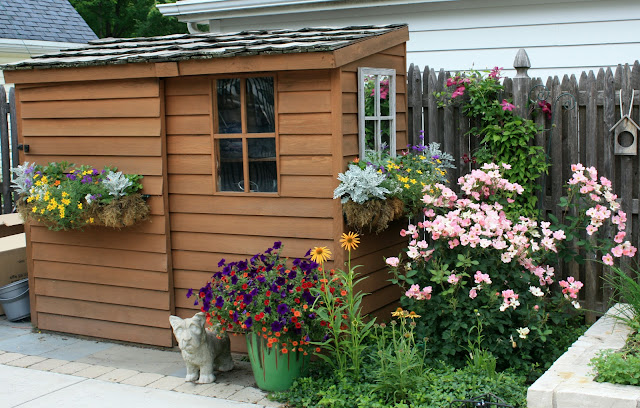 There are only two Rainbow Knockouts planted by the shed but they become very large and fill the space. 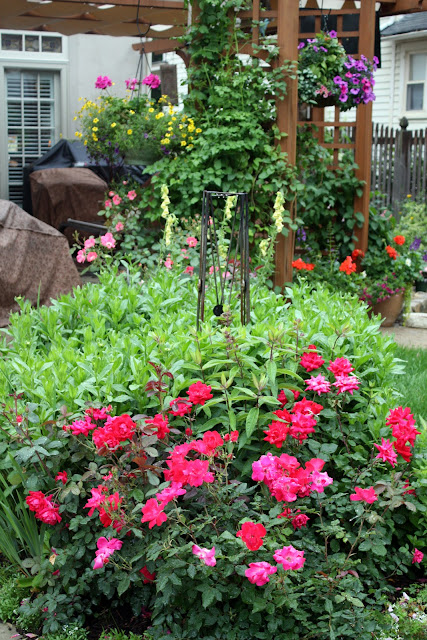 I can finally get to my Type III Clematis, cutting them about six inches above the soil.  Then comes the job of taking down all of the old growth wound tightly around the trellis.  Cut the vines in small sections and they come off very easily without pulling down the whole trellis. 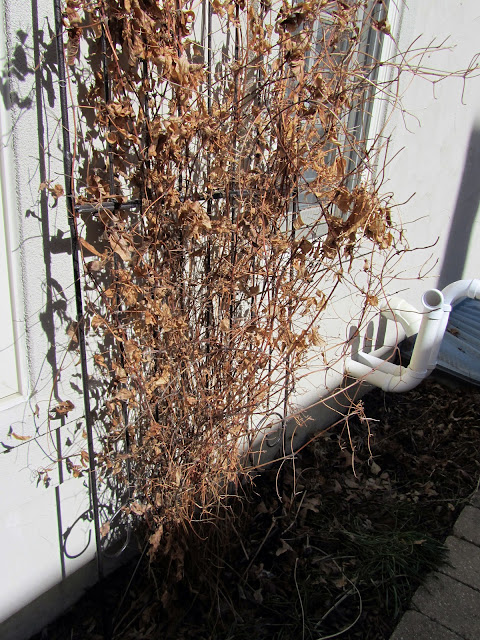 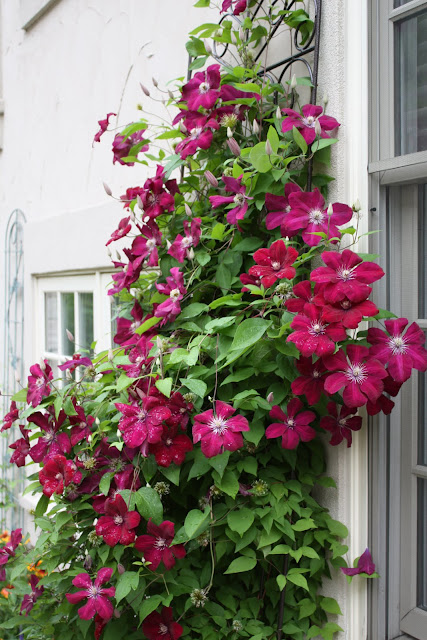 Rouge Cardinal Clematis
I was able to remove the Christmas greens from the hayracks and underneath the greens I found a surprise! 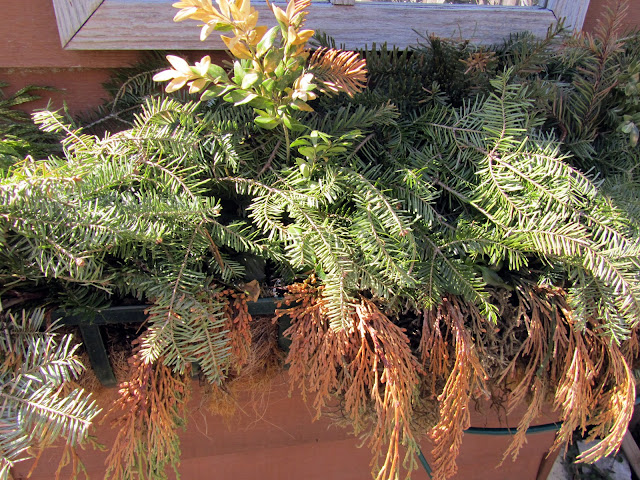 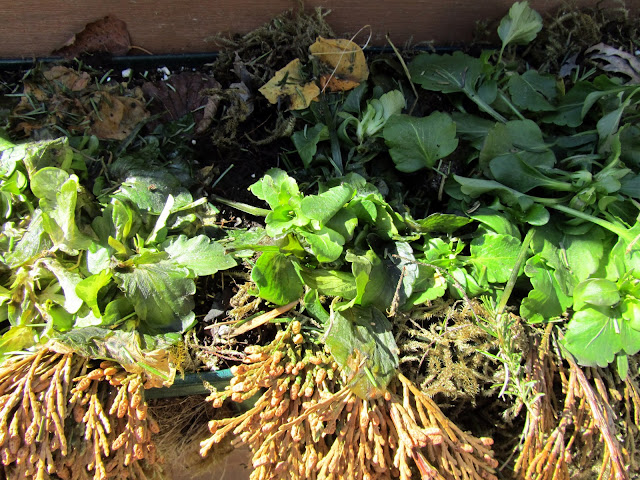 These are the pansies I left underneath the greens in the fall.  They look great, but I have no idea if they will survive into the spring.  I covered them up with a few loose greens, so we'll see.

It's time to trim my Limelight and Unique Hydrangeas, leaving a three foot semi-circle frame around Limelight (gives support to the stems during the growing season) and 24" of stems on the Unique. 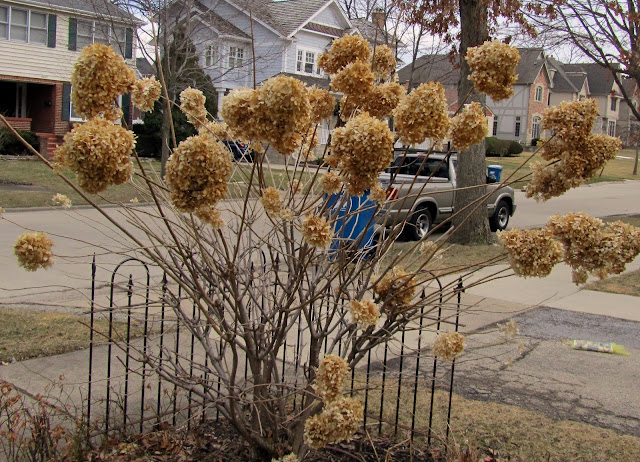 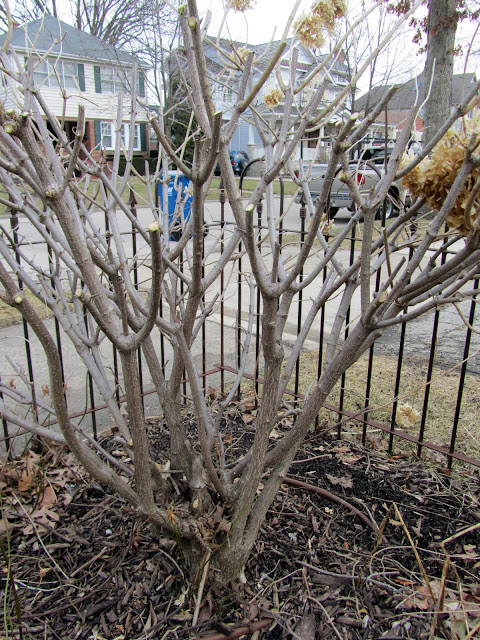 Limelight
Cut down to about three feet in a semi-circle with all inner thin and dead branches cut out. 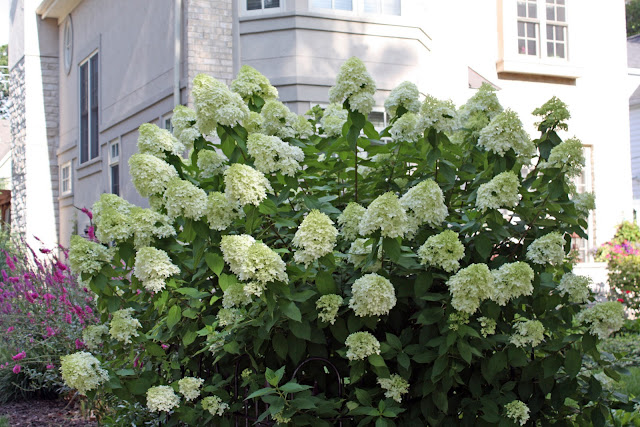 ﻿Limelight Hydrangea
It produces a very full rounded shape when trimmed in this manner. 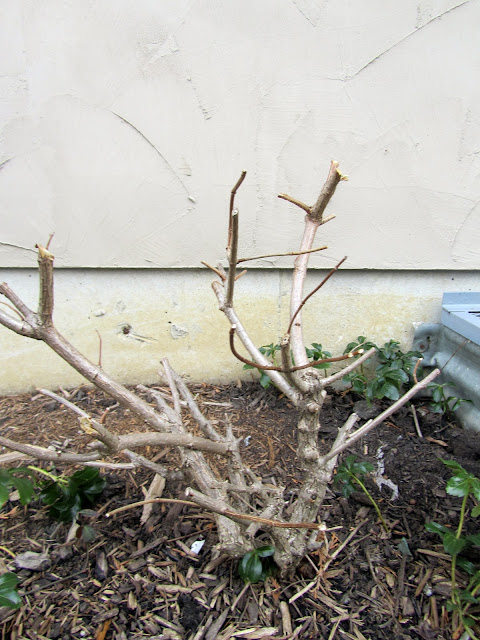 Unique Hydrangea
I had cut this down in the fall, which doesn't matter because it blooms on new wood, but I will be cutting out those thin branches. 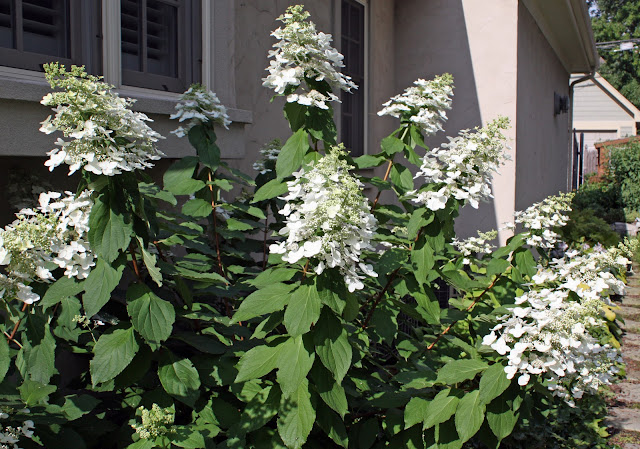 Unique Hydrangea
Even with cutting down to about two feet it grows to about seven feet by July.

This is only the beginning, lots more trimming to do!