I love that song by Billy Joel, and he could have written it about me, or maybe my theme song should have been Downtown by Petula Clark.  Anyway, I went to Chicago on Thursday with my Art Institute Group to hear a presentation by Terry Evans, My Expeditions:  Prairie and Other Landscapes.  Terry is a world class photographer who moved from Kansas in the 90's to Chicago and transferred her skills to many other types of prairies, city, inhabited, aerial, etc.
I am going to show you a sampling of her work at the beginning of the post because there was none available to photograph at the Art Institute.  Her photos were shown to us on a powerpoint presentation so I downloaded some of the available photos from the Internet.
On with our adventure . . . 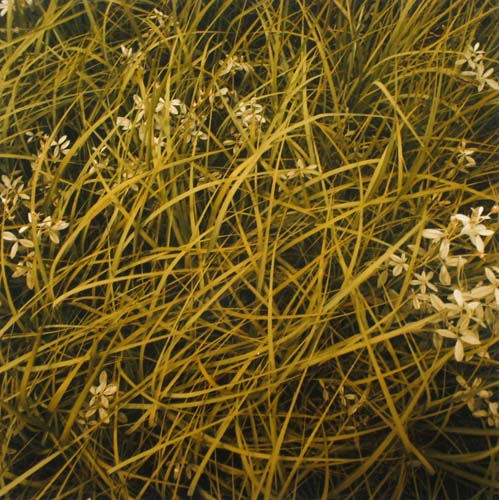 Standing with her camera waist high Terry took pictures of the prairie. 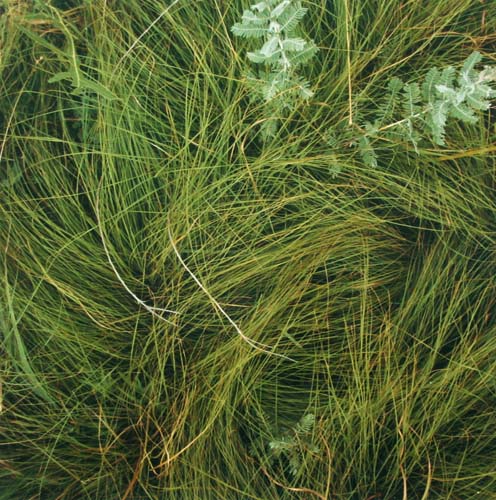 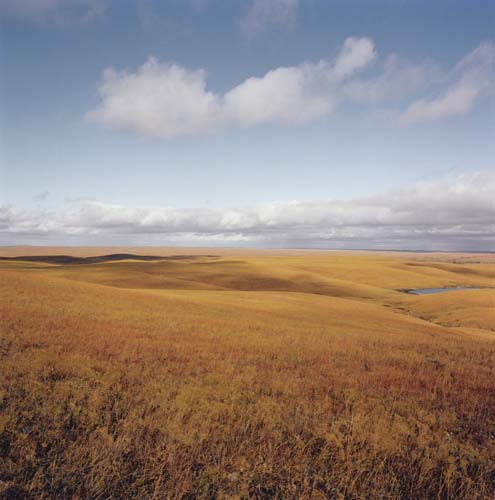 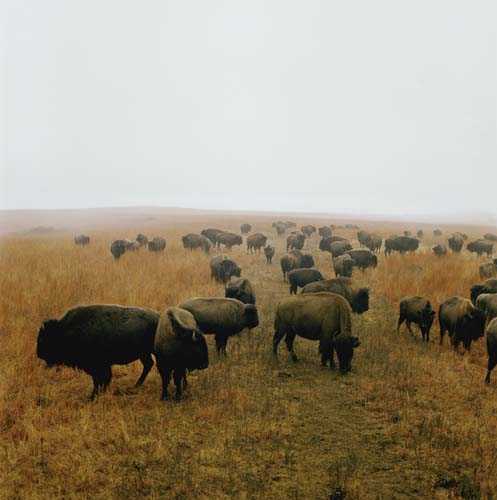 Bison on the Kansas Prairie 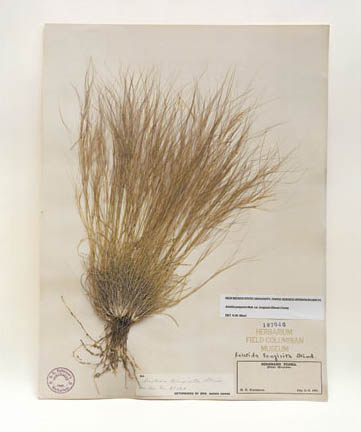 Prairie Specimens from past centuries 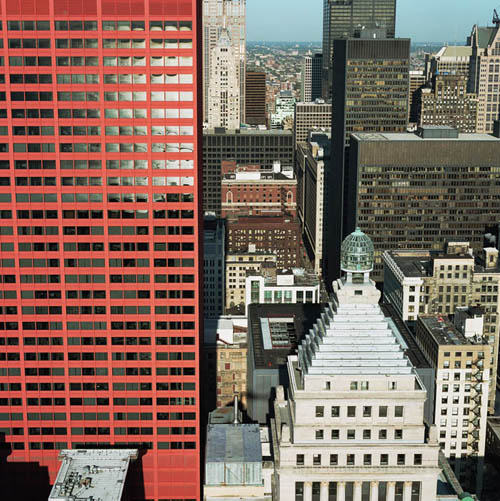 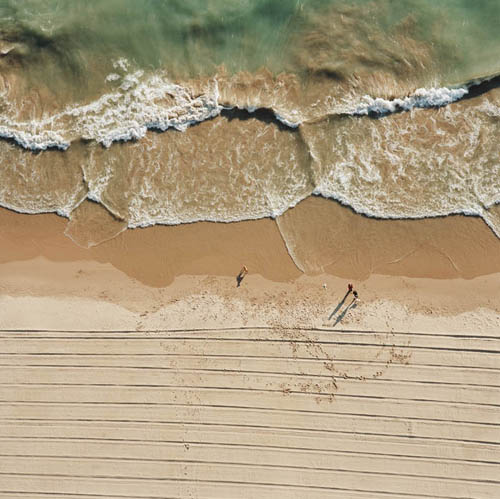 Oak Street Beach in Chicago
We took an early morning train into the loop (another name for Chicago downtown), long ride because it made every stop, certainly not the business express. 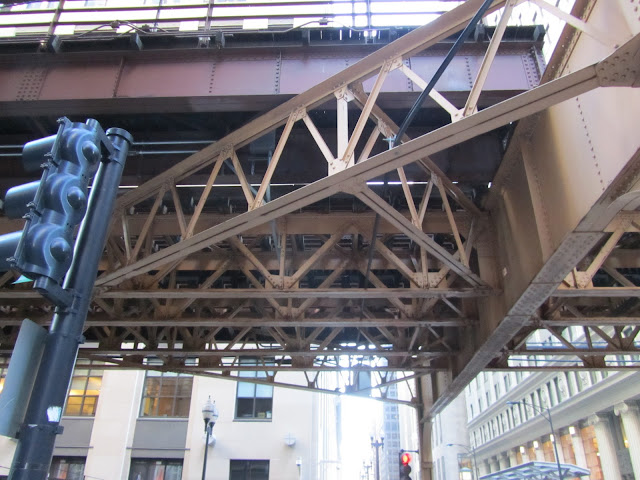 This structure above the city is call the El.  This is an elevated train system that runs above the city in the downtown area.  I came in from the suburbs on the Metra system train, not the El. 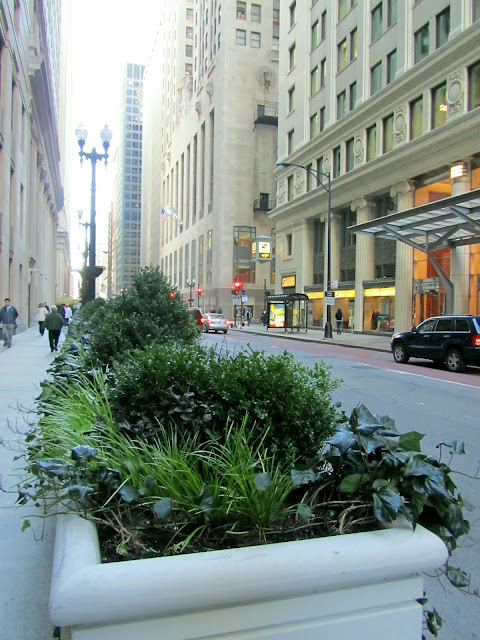 As we walked to the Art Institute, we couldn't help admire all the beautiful planters that line the city streets.  Our current Mayor Daley is a huge proponent of beautification.  He is retiring so I hope his successor continues his work on the greening of Chicago. 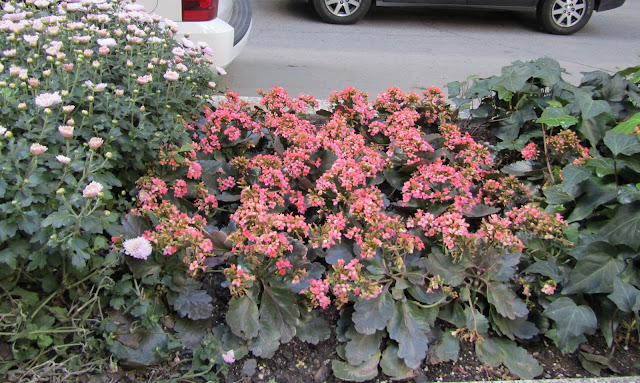 The flowers do not seem to have been nipped by frost yet.  However, the downtown temperature tends to stay warmer in the fall because of Lake Michigan.

I grew up in Chicago but far south of the downtown area.  As a child and young adult we came into the city often for shopping and after high school dances and proms.  I remember seeing Johnny Mathis at the Chez Paree after a school dance before he was ultra famous, going to the Empire Room after a prom and later on going to just about every college dance at some big hotel, even saw a very young Bob Newhart perform at his alma mater Loyola University. 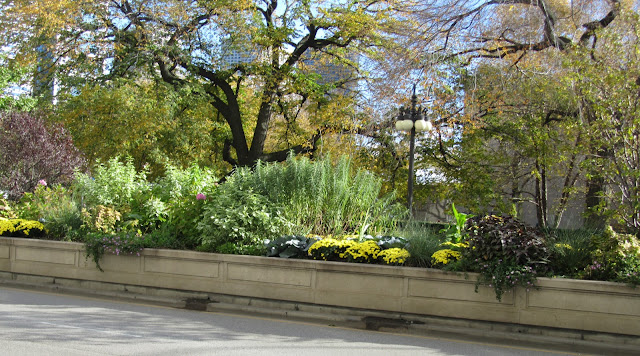 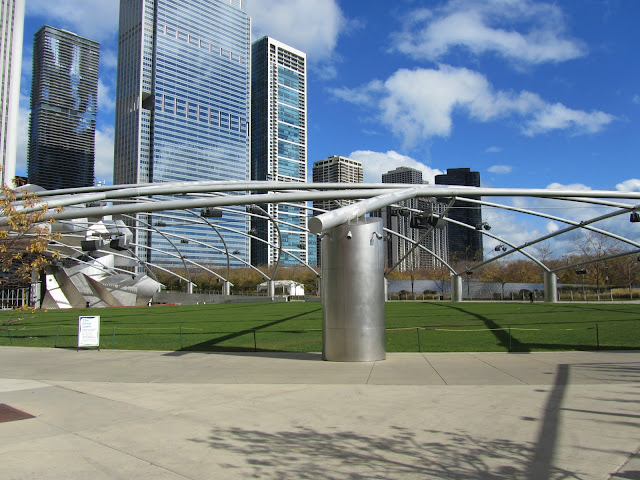 The band shell at Millennium Park 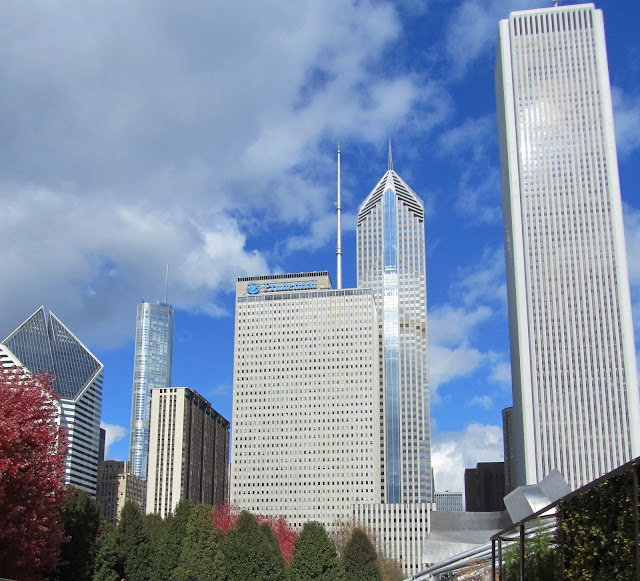 The shorter building in the middle is the Prudential Building which used to be the tallest building in Chicago! 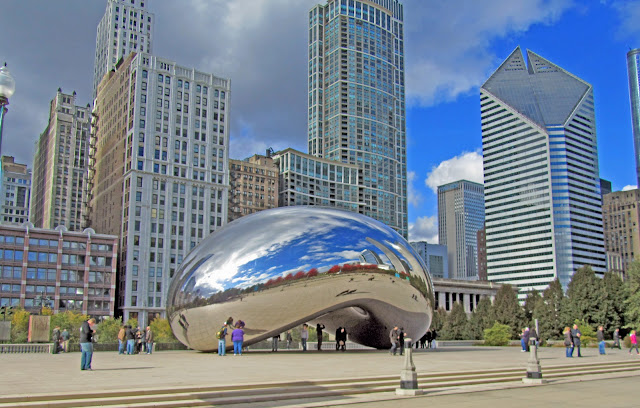 The Bean at Millennium Park 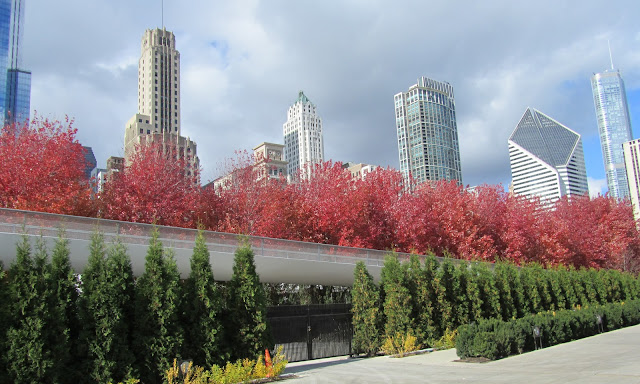 Beautiful fall colors in Millennium Park against the skyline
I worked downtown for several years on Michigan Avenue, frequented the local hotel restaurants like the Blackstone, Conrad Hilton, Palmer House and The Pick Congress Hotel for lunches and after work get-togethers.  There weren't many great places to go once you got out of the city proper, so we socialized in Chicago.  I guess that's why so many young people now want to live in the city - I lived at home! 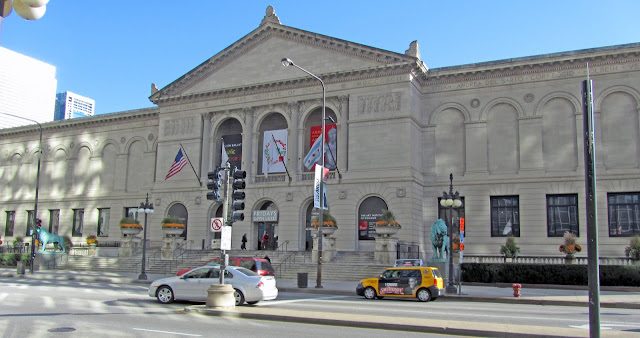 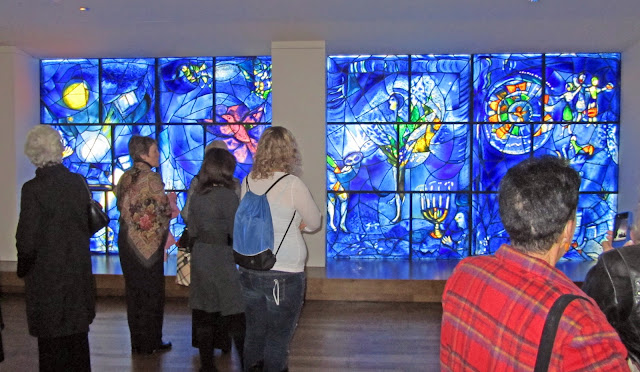 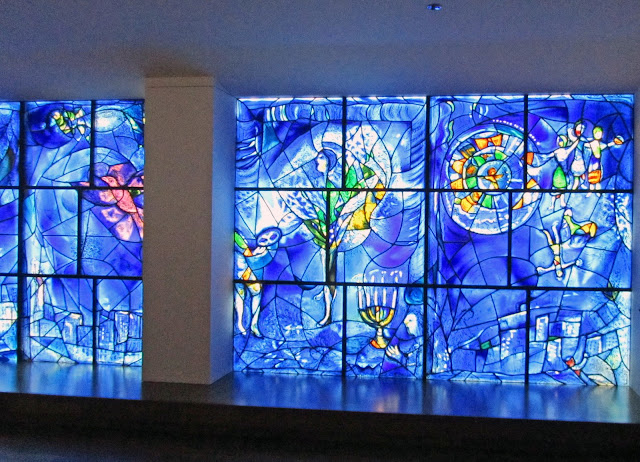 I finally got a clear shot of three of them without people standing in front! 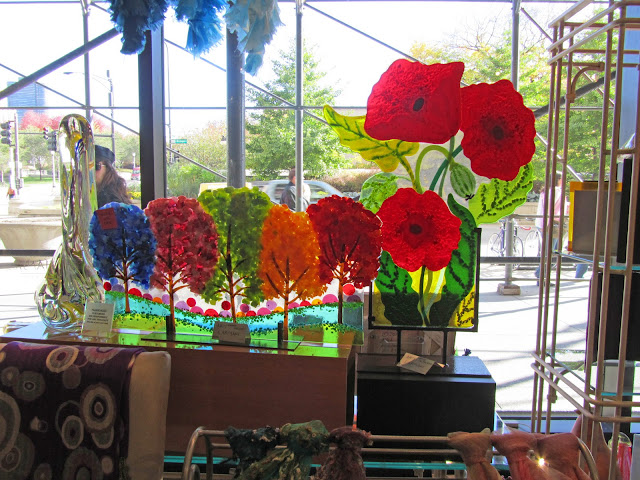 We had some time to stop at the Museum store across from the Art Institute (Arts & Artisians) http://www.artsartisans.com/  - loved these glass flower sculptures.  I wonder if they would hold up outside? 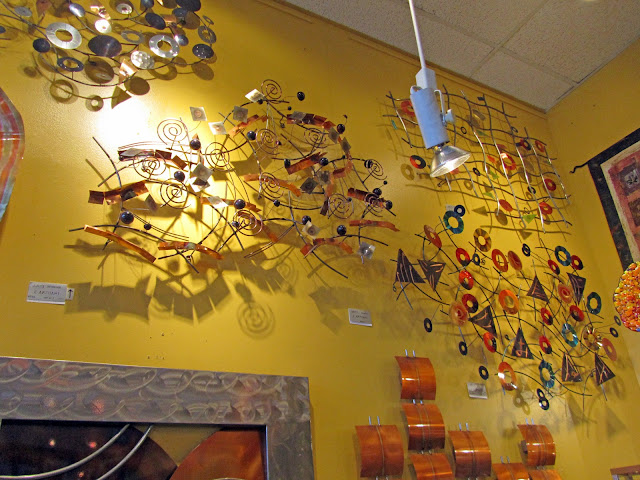 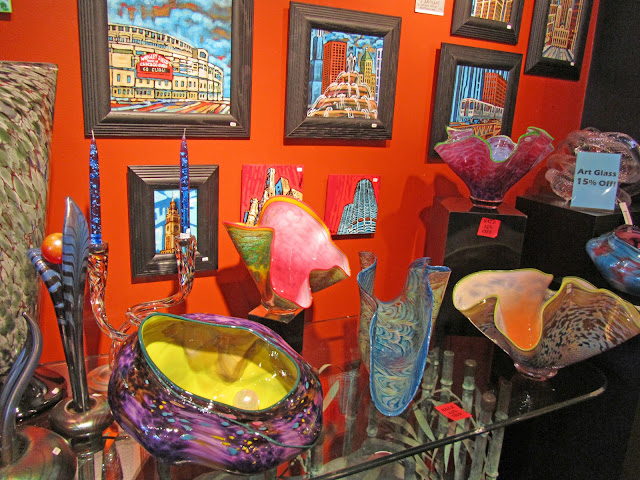 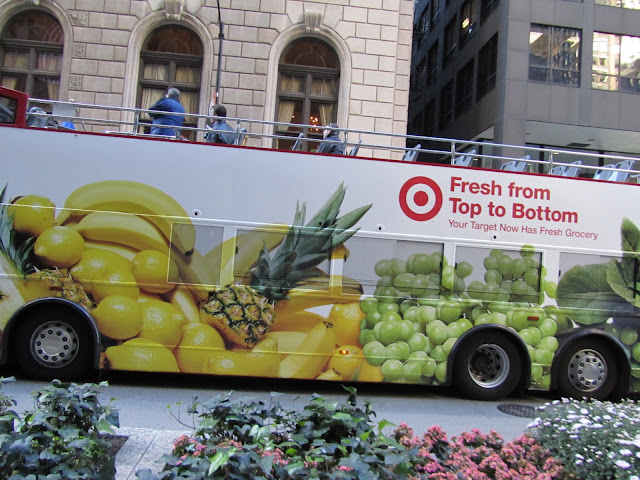 Lots of sightseeing buses as we traveled along to lunch 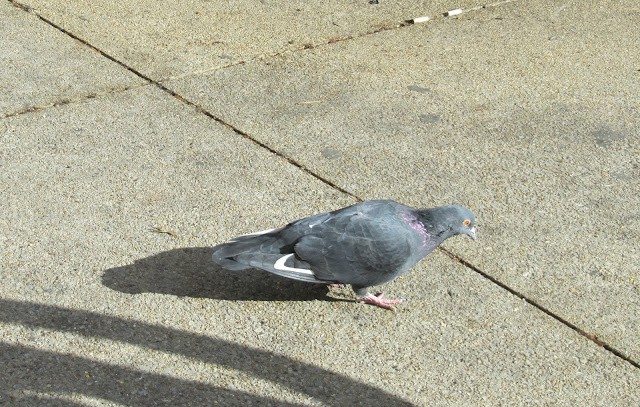 A little pigeon looking for his lunch! 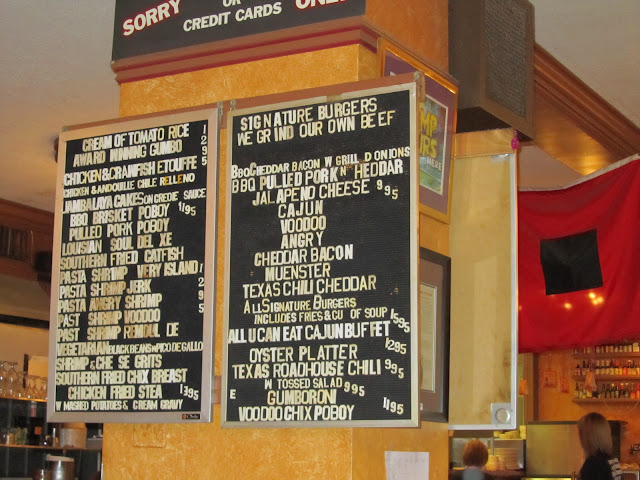 Lunch at Heaven On Seven (Cajun food on the seventh floor of the vintage Garfield Building) No Credit - good thing we brought cash! 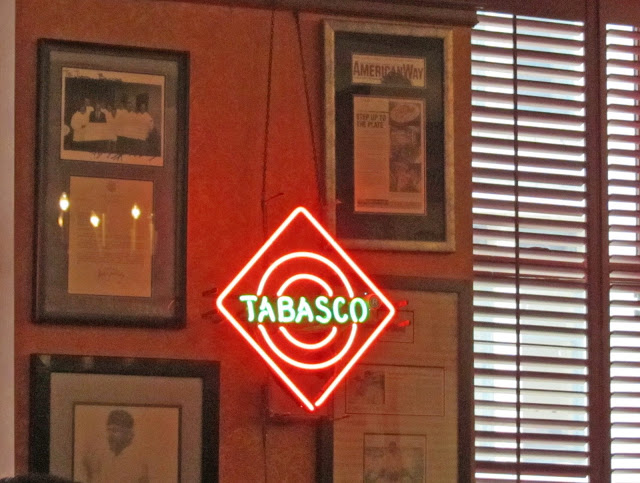 I think they had lots of this in everything! 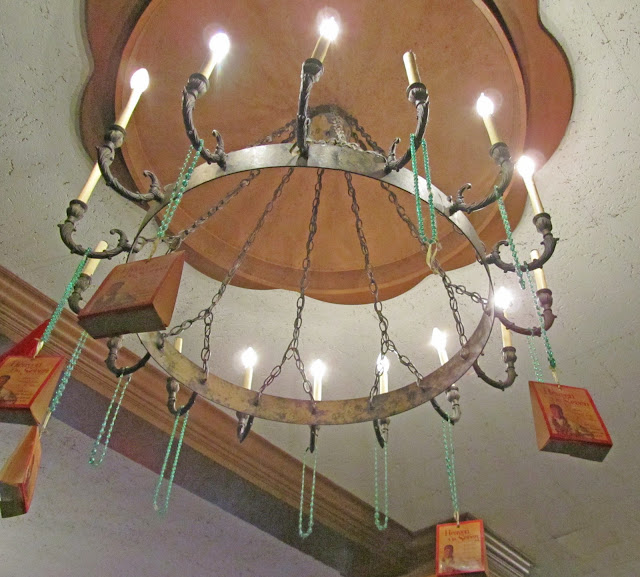 They even had hot spice pouches hanging from the chandeliers.
We had to really hustle to get back to the train station or we would have had to wait an hour for the next train.  I don't recommend this after eating Cajun crab cakes for lunch!
Posted by Gatsbys Gardens at Saturday, November 06, 2010 25 comments: Links to this post