Several years ago I opened an account on Ebay called Gatsby's Gardens.  I never did much with it and it went into oblivion.  When I went to resurrect it for a blog the web name was no longer available so I took Gatsbys Gardens.

The name really began a long time ago with F. Scott Fitzgerald and his book The Great Gatsby.  I first read the book and then saw the movie, and of course fell in love with that time period.  My husband and I began many years ago to collect furniture from the period and began to relate to the stories our relatives told about that time.  My mother and aunt were both what you would call "flappers," living through this volatile period with the stock market crash and then the depression.

My mother came to the United States  from Ireland the year The Great Gatsby was published.  She was a teenager and joined her sister who had immigrated a few years earlier.  When the stock market crash happened people lived in limbo for many years during this period without jobs, without lives!  My mother married when she was older and also had children as an older mother.  It was many years before the economy began to recover. 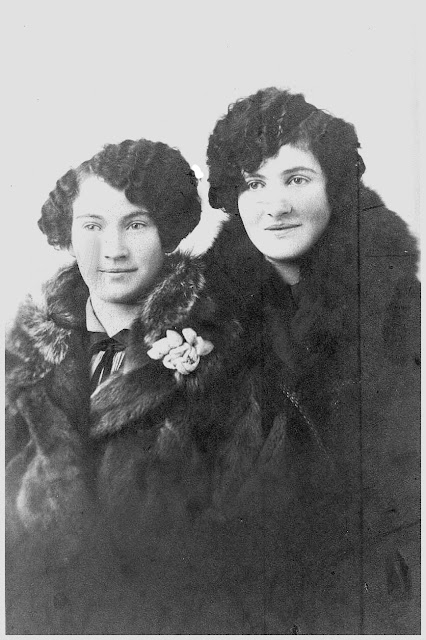 My aunt and my mother
It certainly does remind me of what is going on now, those high flying days at the beginning of this century , the crash, the job loss, the long climb back to prosperity

Oh by the way, they have just cast Carey Mulligan (Wall Street:  Money Never Sleeps) as Daisy Buchanan  in a remake of The Great Gatsby!
Posted by Gatsbys Gardens at Friday, November 19, 2010 21 comments: Links to this post