It's Time For The Cabbages!

Some of you may remember last year that this was the time of year I pulled out my summer container plantings and went on a hunt for ornamental cabbages. 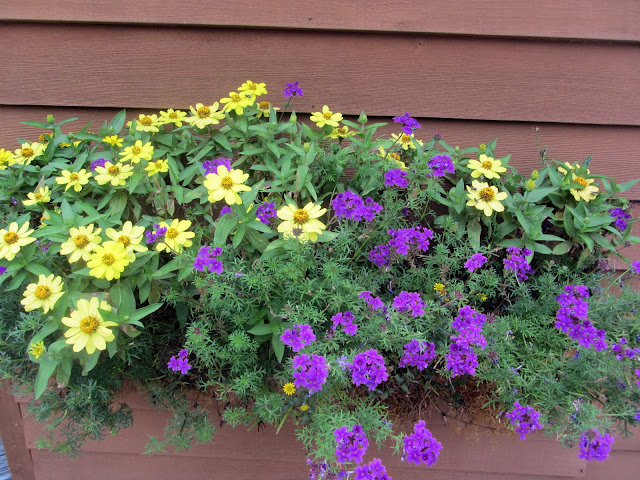 I am sure there will be some small cabbages in the hayracks. 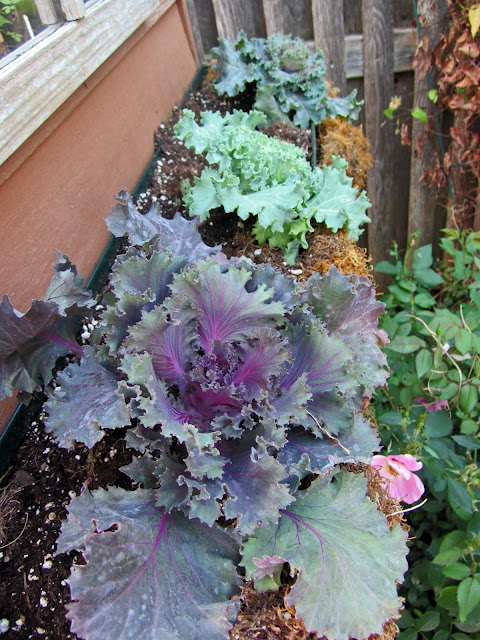 Cabbages are wonderful in the fall garden opening up pink, red and white.  I will add some pansies and some gourds and small pumpkins when it gets closer to Halloween.  Yikes, did I say Halloween already?
I thought maybe this year would be different but it's not, same intense heat and lots of moisture so the plantings are beginning to look done even though I have fertilized and trimmed often. 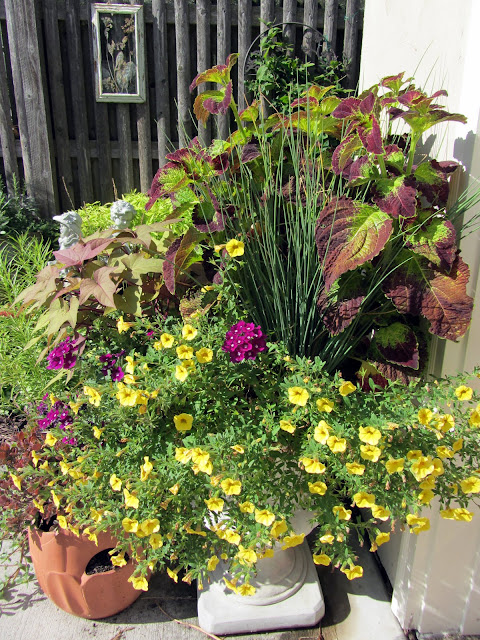 The concrete containers by the garage were just fine for most of the summer but I am having trouble keeping them watered because of the size of the roots.  They are just begging for a big cabbage! 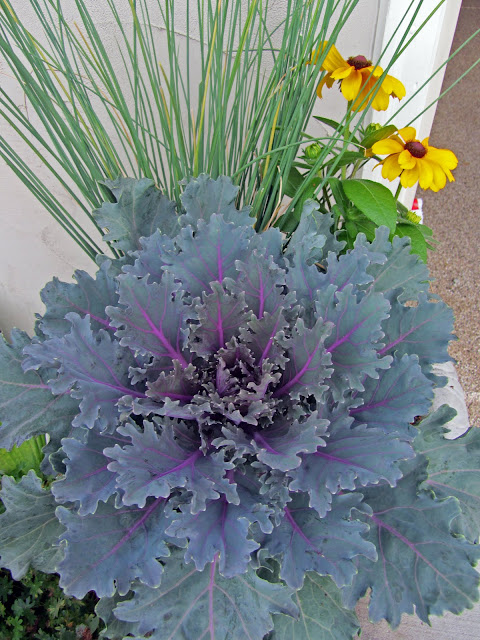 Added Rudbeckia and cabbage, kept the Blue Mohawk Rush from the summer container.  This cabbage will open up as it grows to a beautiful rose pink. 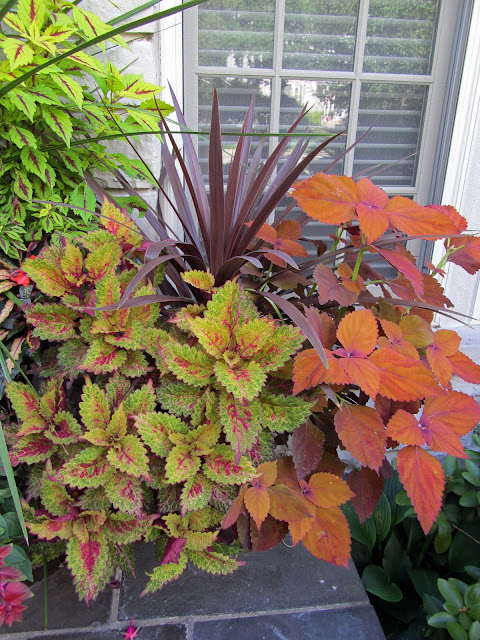 I have some large feathery cabbage pictured in the tall brown ceramic pots. 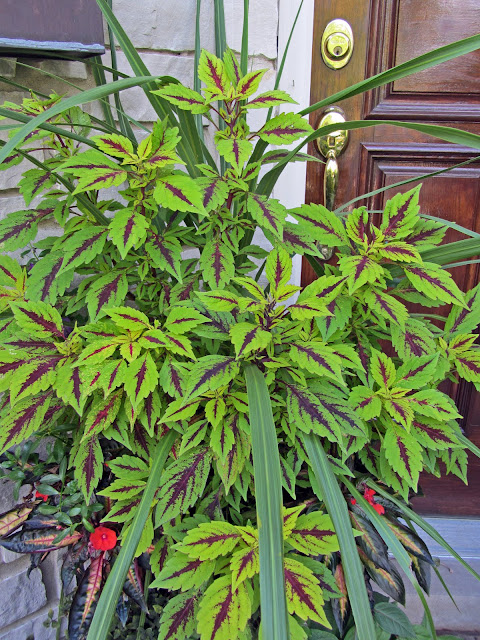 Pineapple Splash Coleus, impatiens, fuchsia, angelonia and dracena held up well during the summer, but now it is a minimized fall planter with cabbage and the full grown dracena from the summer. 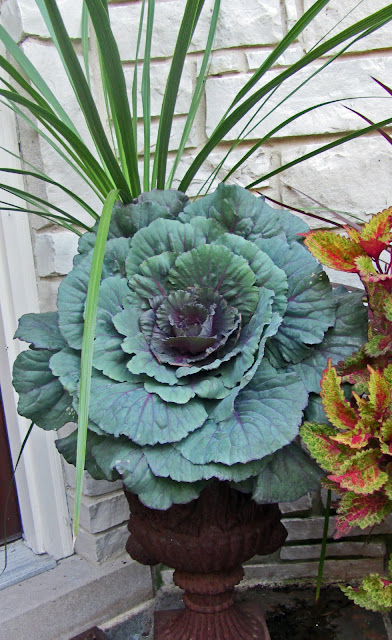 The cabbage is enough "pop" in this container for the fall.
I did plan ahead this year with colors and plants that I could utilize in my fall planters such as grasses and bronze colored sweet potato vine. 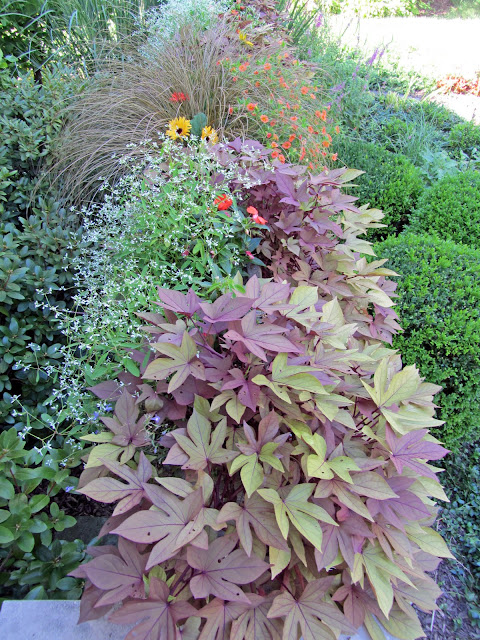 Even though the colors look fall, the sweet potato vine and impatiens will be gone with the first hint of cold weather.  Diamond frost euphorbia will hold up until frost as will the carex grass.  I am sure there will be cabbages in these front planters also. 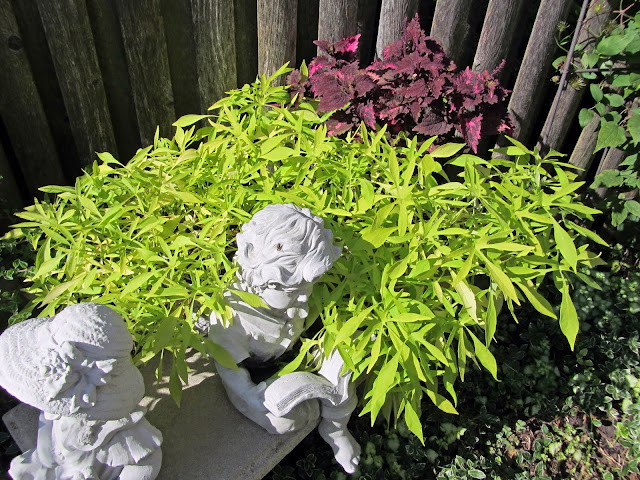 The Emerald Isle Sweet Potato Vine was a beauty all summer and the Irish pots will be cleaned and put away for the winter. 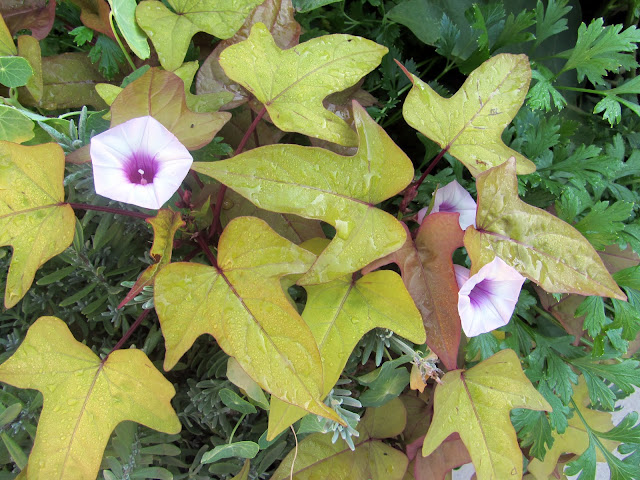 The Bronze Sweet Potato vine was a surprise this year flowering off and on all summer.

I am trying to avoid doing too many mums as they do not hold up over a long period of time and I do not have room to plant them in the garden with the slim hope that they might come back next year. Mums do bloom at different times just like Daylilies so you can plan succession blooming.  It is not an easy plan as most nurseries do not designate on their tags which are early, mid-season, late or extenders.  This can be researched on the Internet. Asters in containers look great and then fizzle out before their time.

I have found that perennial sedums (like Vera Jameson used as a spiller), annual rudbeckias, grasses, cabbages, Bright Lights Kale, Cordyline, Dracenas and Pansies are long lived in fall planters.  Plug in a few small mums if you can't do without them and then you won't feel so bad pulling them when they are done.

Fall is the shortest time frame for containers so think ahead what you can use in your containers that are perennials and can be moved into your garden before a hard freeze.  I even saw phlox in a fall container at one of the nurseries.
Posted by Gatsbys Gardens at Thursday, September 01, 2011 26 comments: