It Was a "Rockin" Day

The Art Institute of Chicago has a study group which has some really neat side trips that do not always involve going into Chicago.

Last Thursday's trip was to  a suburb of Chicago where there is a lapidary museum call the Lizzadro Museum of Lapidary Art.  Joseph Lizzadro came from Italy around the turn of the last century as a young child.  He rose in the business world to become the chairman of the board of Meade Electric all the while having a passion for lapidary (the cutting and polishing of stone). 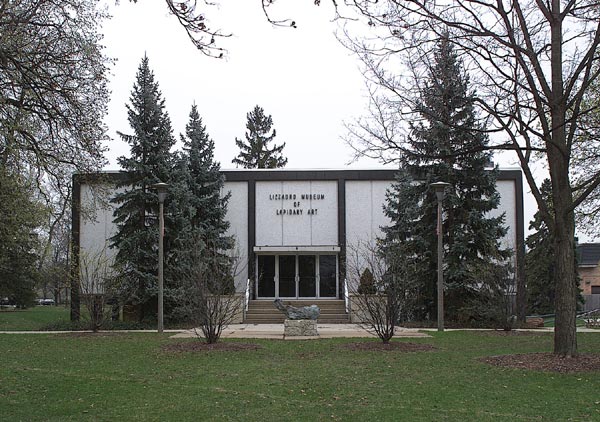 This is a Florentine mosaic of Joseph Lizzadro.  These are all separate pieces of stone fitted together to look like a painting, took four years to complete. 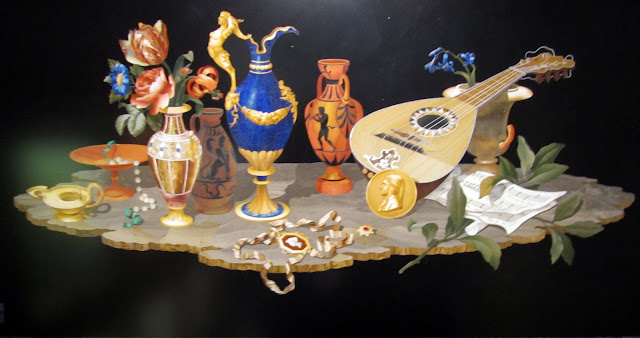 Florentine Mosaic
Joseph collected throughout his lifetime not only antique stone but more important stones that were cut with expertise and creativity. 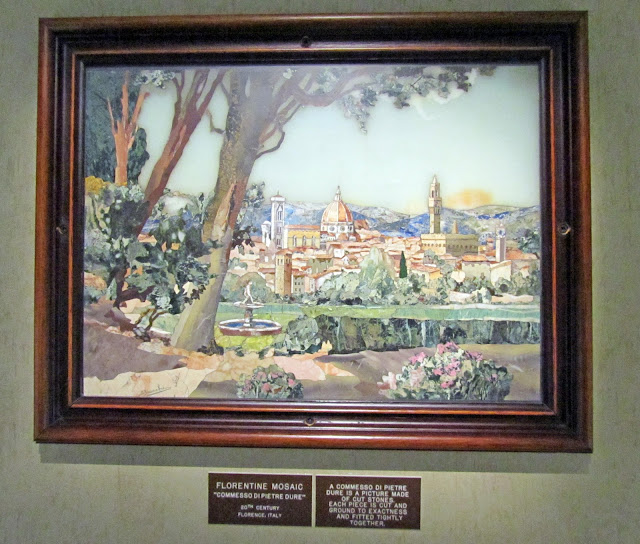 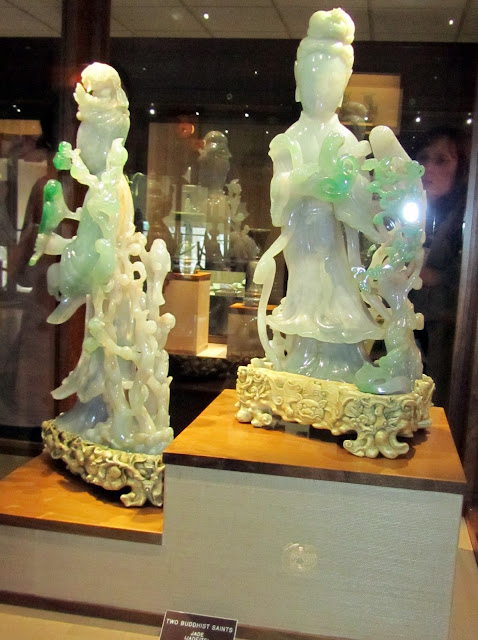 A most rare and expensive color 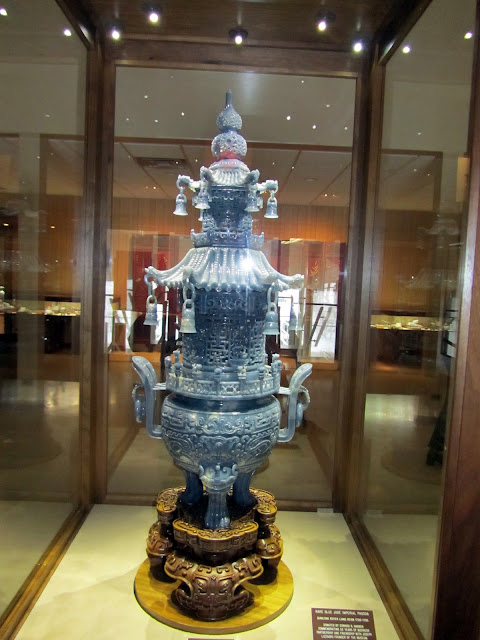 A rare blue color but not as desired as the green Jadeite
Wow!  I was totally bowled over by all of the precious gems and minerals on display at this very small museum.  These are all things that come from this earth after millions of years of impact on the soils that we as gardeners work in each year. 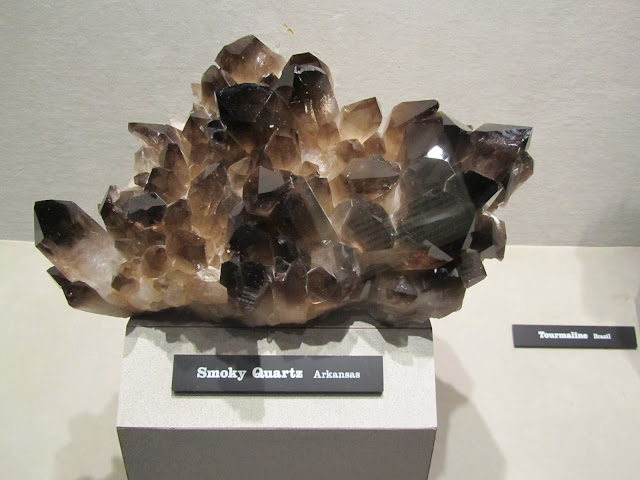 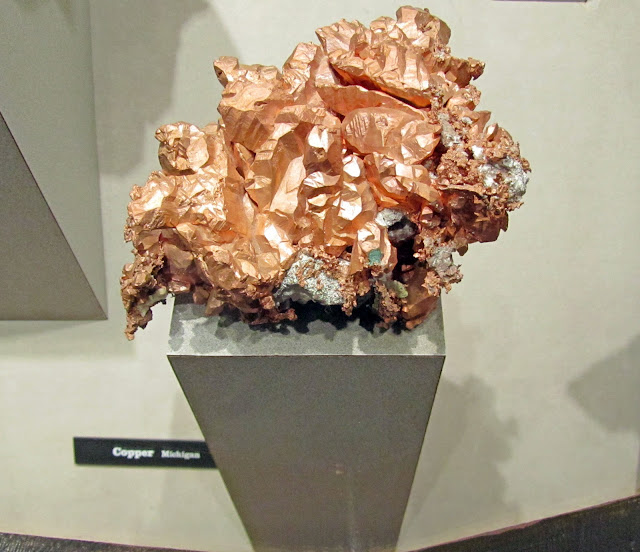 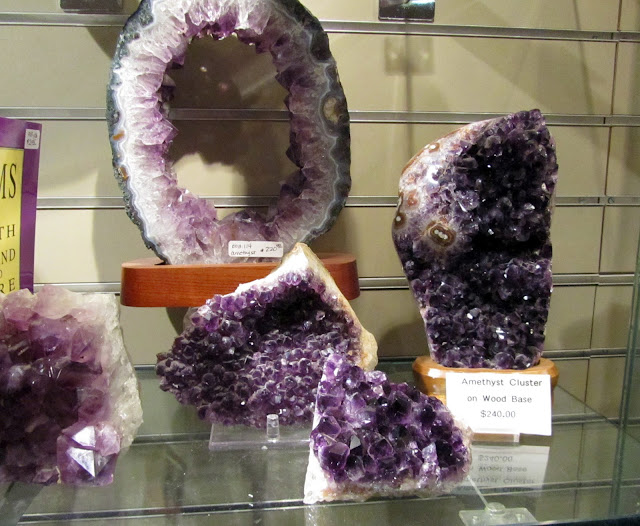 Amethyst
A Gemologist guided us on our tour explaining the difference between rocks and gems, rocks being made from more than one mineral and gems usually having just one  major component.  Lapis happens to be a rock that is also classified as a gem.

Mr Lizzadro began collecting back in the 1920's mostly pieces that were not necessarily antique but of the utmost quality as far as carving and formation.  He was an artist in regard to producing finely carved pieces and jewelry.

He purchased many pieces from China that were of the Jadeite and Nephrite quality many priceless today. 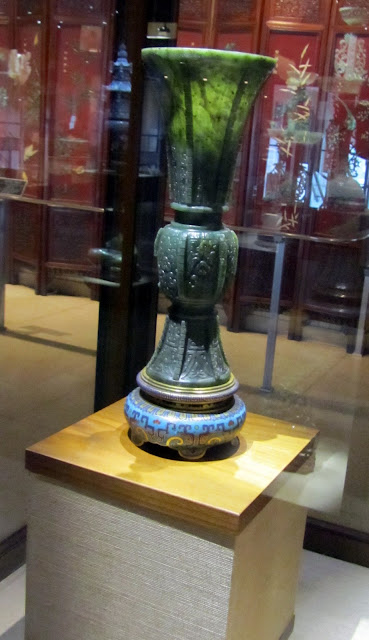 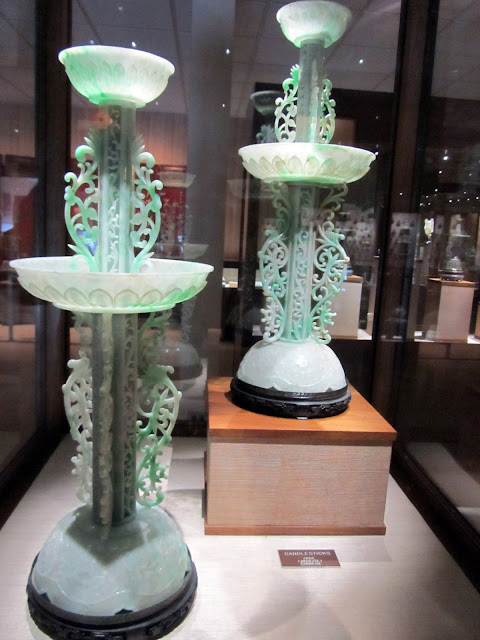 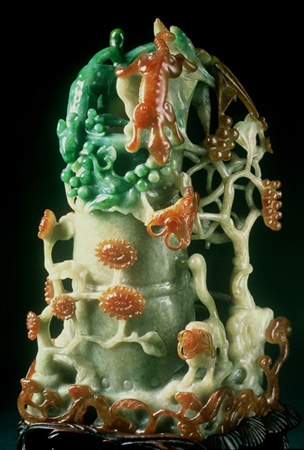 All of these colors were contained within one full piece of Jade
I am ashamed to say that I went many years to college across the way from this unique museum and never ventured over for a visit.  I said to myself, rocks,? why would I be interested in rocks?  Well, I finally got here and probably appreciate it much more than I would have then. 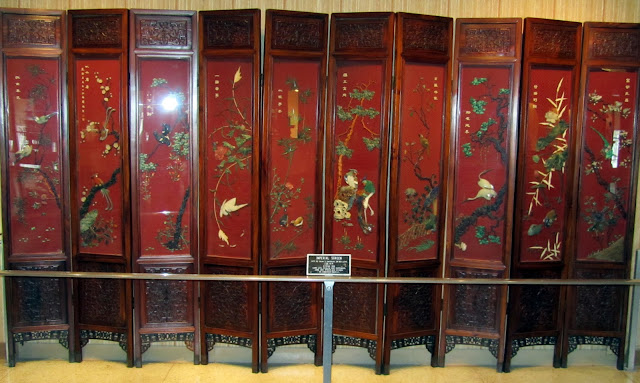 This is a screen made entirely of stones all pieced together like a wonderful painting given to the Emperor of China in his "white eyebrow birthday year" (assumed to be about 70 years old) in 1736.   The background is all made of cinnabar in multiple patterns. 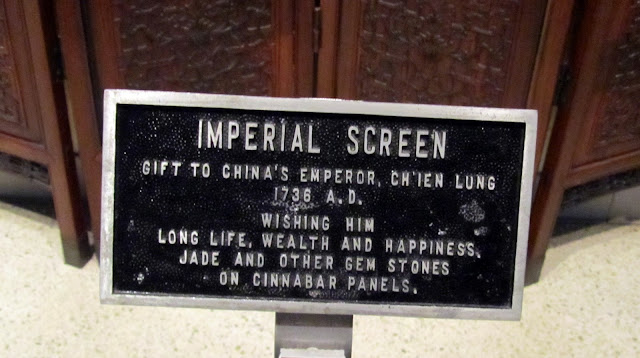 The Lizzadro has dioramas that line the walls filled with unique carvings that both children and adults love to look at. 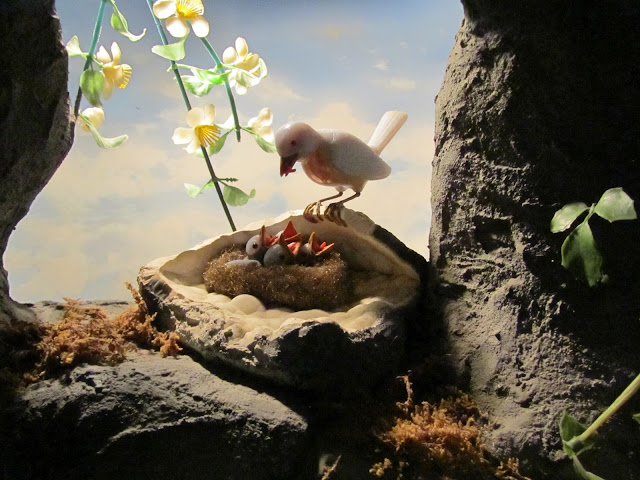 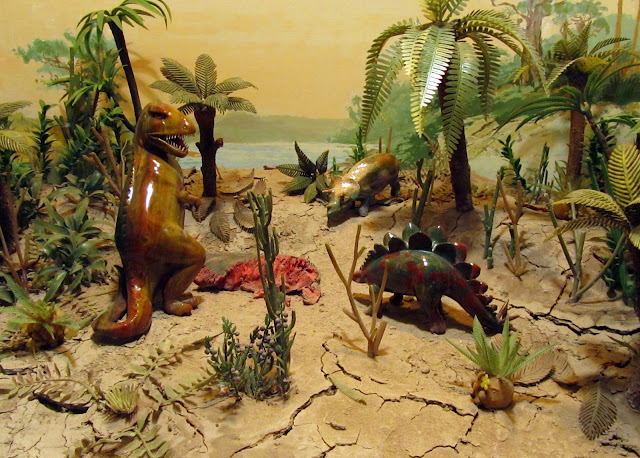 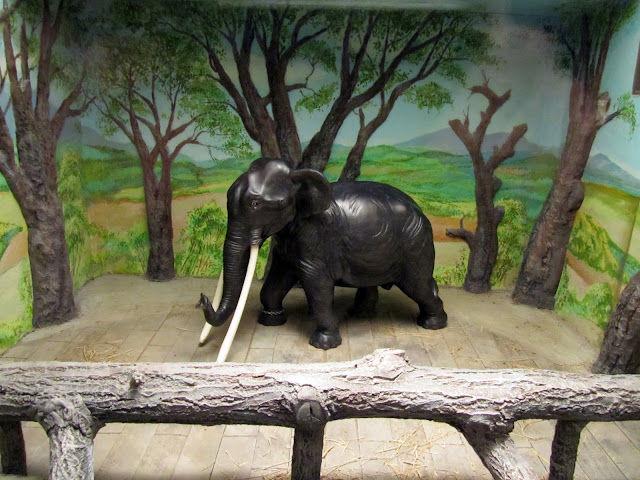 Ziggy
He was the longest living elephant from the Brookfield Zoo.  When he died in 1972 they used his tusks for this carving.  He is carved from Obsidian and ivory. 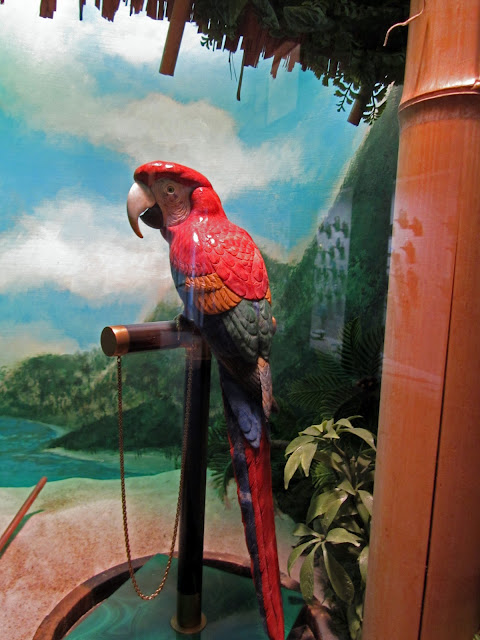 The parrot is carved from Jasper and Malachite
There is a full wall of snuff bottles, snuff being powdered tobacco, which was used from the 1600's until about 1912.  It was at this time that cigarettes replaced the snuff. 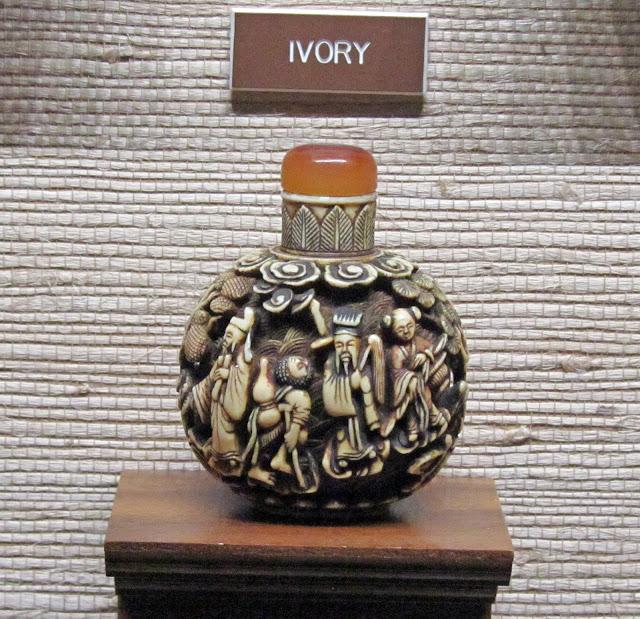 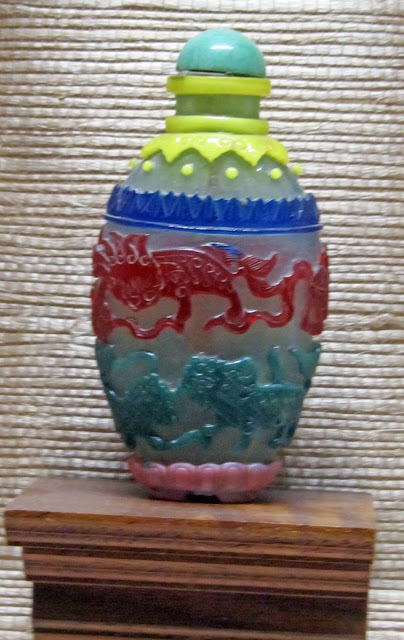 In the background, we kept hearing this typewriter typing, I mean a real typewriter with the return and the sound of the return going back and forth.  We were all laughing wondering if it was the sound of the new iPad or Netbook!  As we moved closer to the desk area I spied that it was an IBM Selectric circa 1964, we all thought we had somehow been sucked into "Back To The Future."
Posted by Gatsbys Gardens at Sunday, January 30, 2011 19 comments: Links to this post