It was a cold and rainy day when my three long time friends and I decided to do some plant shopping, a little antiquing and of course lunch.  These plans had been in place for awhile so we did not want a little bad weather to put us off.  However, the wind was bitter and I should have worn gloves and dressed more for winter rather than spring. 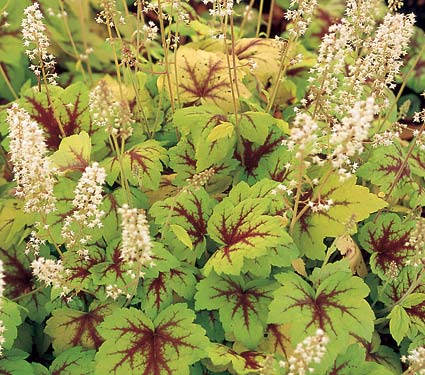 Heucherella Stoplight﻿
I spotted this plant right away in the shade section, although it will take part sun.  I only bought one because I have had Heucherella several years ago and they were not as long lived as the Villosa Heucheras.  I thought I would try this new variety, expensive. 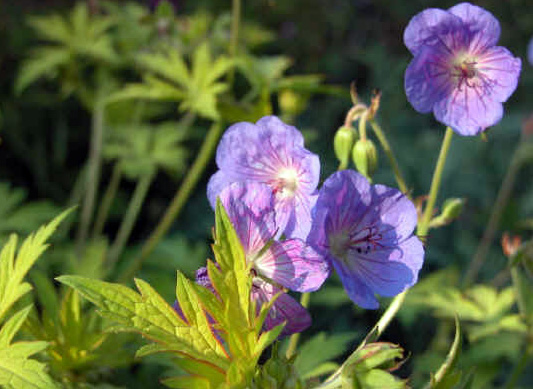 Geranium Blue Sunrise
Again, I think it was the leaf color that caught my eye, starting out orange and turning to lime green.  This is one of the long blooming geraniums that is recommended for growing under roses, similar to Rozanne with a much more vibrant leaf color. 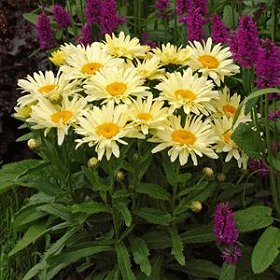 ﻿Shasta Daisy Banana Cream
I saw this variety last year at Home Depot but did not purchase it because it reminded me of Broadway Lights which twice has not come back for me.  I read about it and decided it was worth a try because of the color.
I finally decided to pull out the Rhus Aromatica that I have spent so much time trimming and treating over the past several years.

Ninebark Summer Wine
This is supposedly carefree and drought resistant with lots of seasonal interest.﻿
The four of us had worked together for over three decades so we many times do more talking about all of our memories rather than shopping.  It was more than once that salespeople approached us asking if we needed help selecting a plant or a vintage item.  No, we said, we're just talking!
Posted by Gatsbys Gardens at Saturday, April 30, 2011 17 comments: Links to this post