This is the name of a book about Frank Lloyd Wright a famous worldwide architect who was never trained as an architect but had two years of engineering school in Wisconsin.  I should have done this years ago, but a few friends and I took a trip to Oak Park, Illinois to view the first home he built and lived in with his family.  It was also his studio where he and his underling architects worked for twenty years.  Louis Sullivan, another famous Chicago architect lent Frank the money to build this home and would be an influence in his life forever. 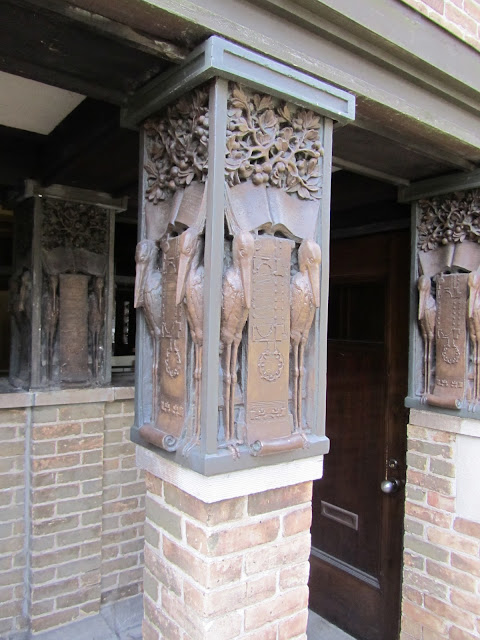 These are the pillars at the entrance made out of plaster which require a lot of maintenance. 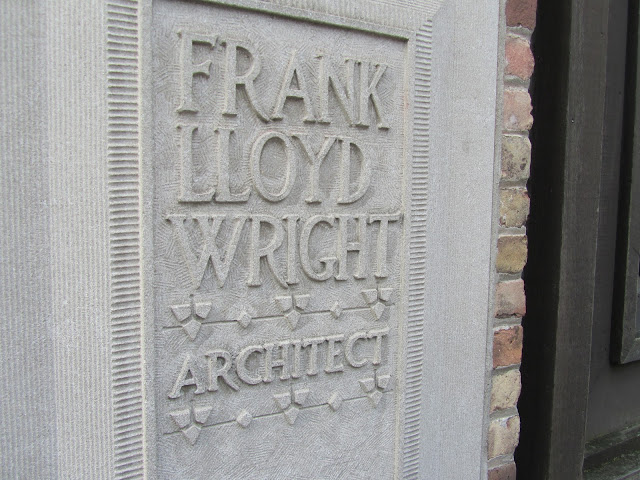 This is his business card that is embedded in each home he built.
We were not allowed to take pictures of the inside of the house because of the flash affecting the artwork and the wood.  However, I did buy a book and hopefully you will get an idea of the groundbreaking design, Prairie Style, this was in 1889. 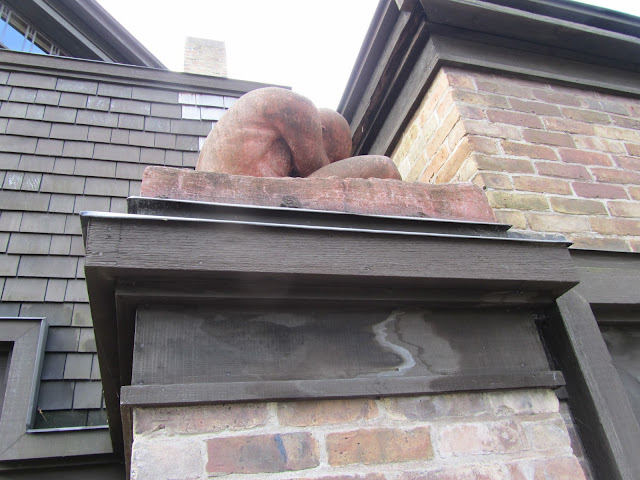 Sculptures on each side of the doorway 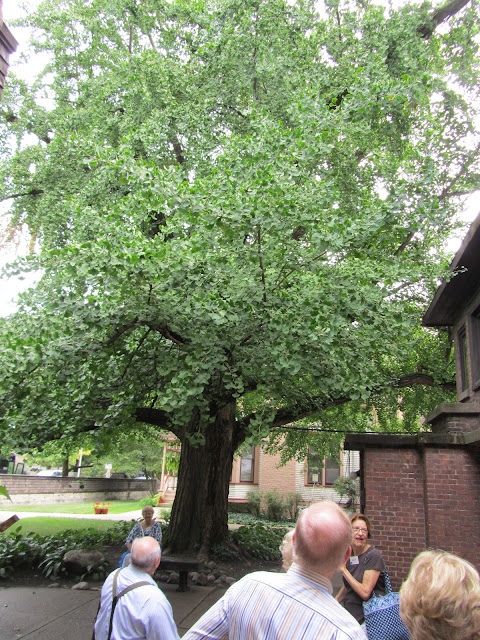 This is a huge Ginkgo Tree that was here before the house was built.  It has outlived its projected lifetime.  Frank was a great lover of nature and even built the house around the limbs of a tree that projected through the side of the wall and up through the ceiling.  The tree had to be cut down so now it is faux limbs that project through the wall just to give visitors and idea of what it looked like.  It looked a little ridiculous to me just like the grand piano that he projected through the wall of the children's playroom coming out over a hallway staircase.  This idea required reworking the whole staircase and one still has to duck so as not to bump your head. 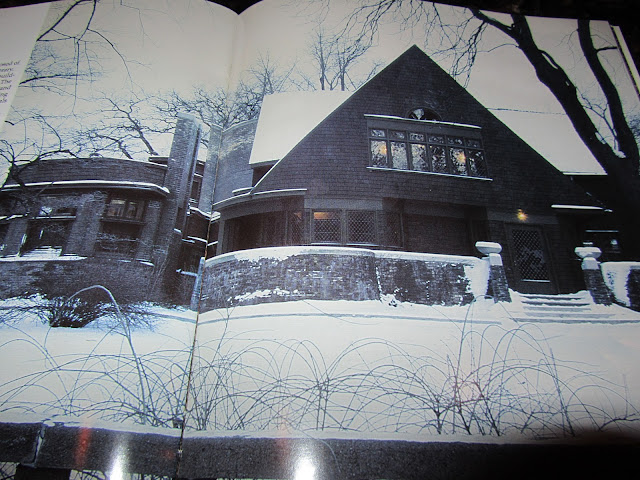 Sorry about the snow but it would not allow me to download the picture in the summer - kept flipping it.
My old house was a Prairie Style house built after the turn of the century with 4" oak trim that dropped from the ceiling and trimmed out the room, 6" oak moldings around the floor, canvas lined plaster walls, push button electrical wall plates, large wrought iron gravity air grates in the floor, leaded glass windows and doors with prisms.  It had a large ironstone fireplace in the living room with cabinets on each side missing the leaded glass doors.  The root cellar and the coal room in the basement were a fascination both for adults and the children. 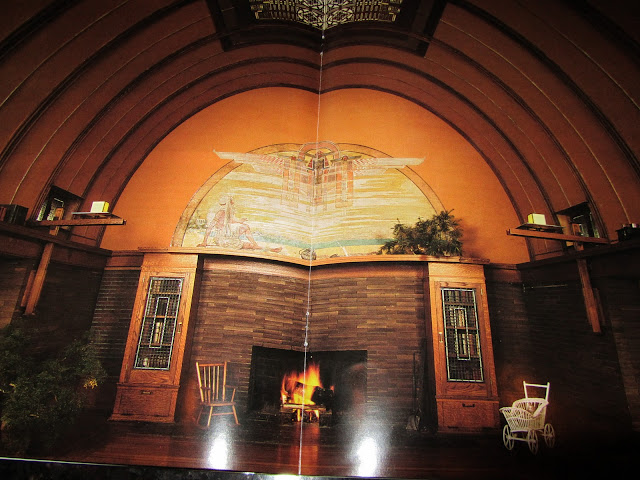 This is the children's playroom in Frank Lloyd Wrights house, beautiful mural depicting his favorite story as a child, built in storage all around the room for toys and an ironstone fireplace just like I had in my old home.  The lighting is original and designed by Wright. 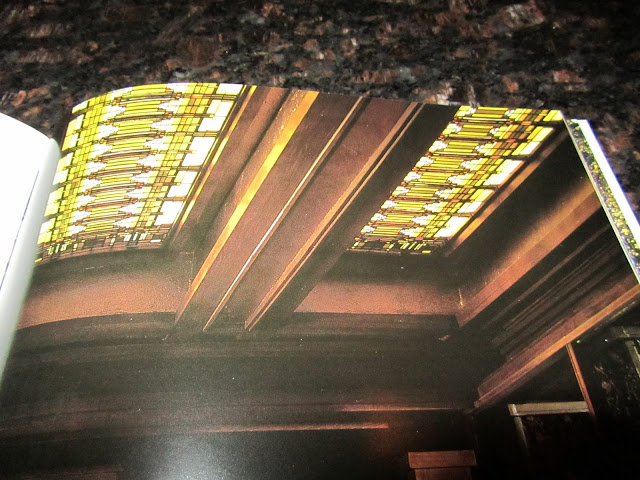 This is magnificent stained glass that was boarded up for sixty years in his meeting room for prospective clients where he showed them his drawings.  It is believed that his sister many have done the stained glass designed throughout the home.
That is why I wish I had gone on this trip many years ago so I could have appreciated  more fully the design of the home I had and where this influence came from.  This is where my woodland garden was, huge trees, raccoons in our overhangs, a garage that had bifold doors that you closed manually and digging grounds in the back where the kids found artifacts from decades past. 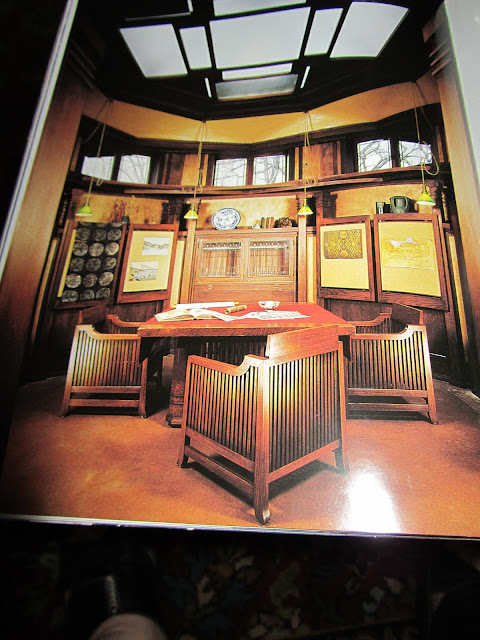 This is an octagonal room and supposedly Frank's favorite.  The furniture in the home is all original being given back by all of the family members after the renovation in 1972. 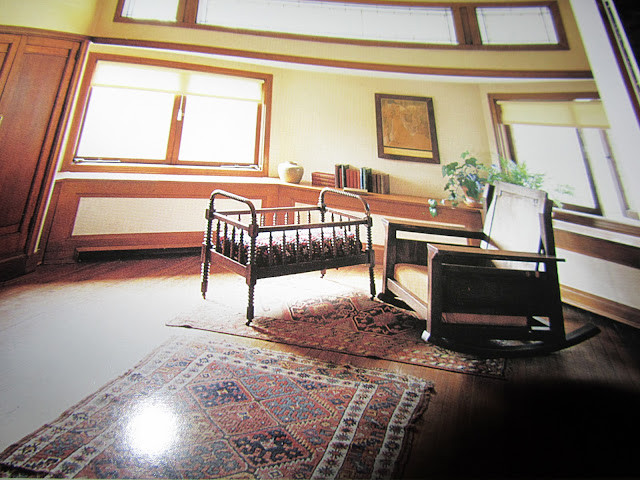 This was his wife Catherine's day room with the baby crib that held forty Wright descendants.  Anne Baxter (the movie star, All About Eve, was Wright's granddaughter) returned the crib and several other pieces to the home after the renovation in 1972.
My husband had stripped off ten layers of paint from the beautiful moldings (it took seven years) and we peeled off the crumpled canvas in a few rooms to reveal perfect plaster walls.  We put on an addition to add

a master bedroom, family room, a bathroom and a screened in porch.  It was a money pit but it had an atmosphere and a history that can never be replaced in a newer home.  Some children long ago had carved their graduation date from the local high school in the huge beams in the basement, my children also carved theirs. 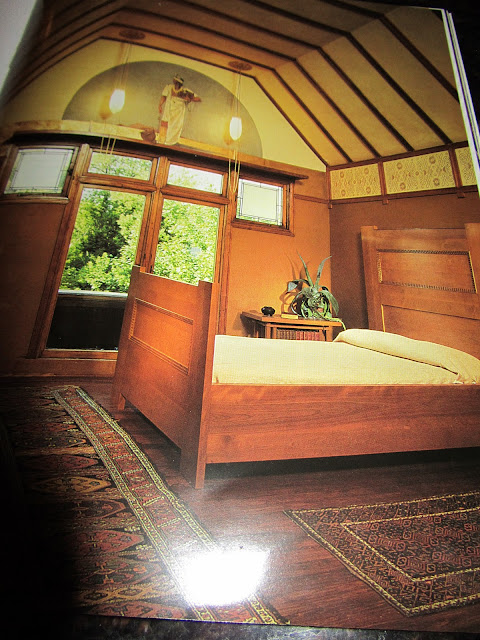 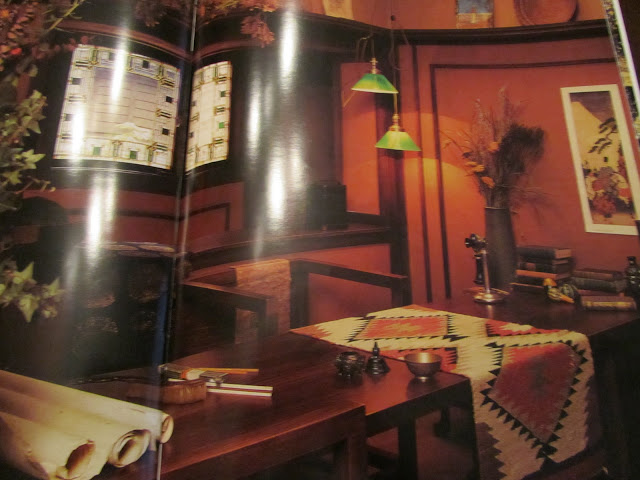 This is the small dining room which they soon grew out of with six children in eleven years.  It then became a study area for the children.  The hanging green glass lights are original to the house. 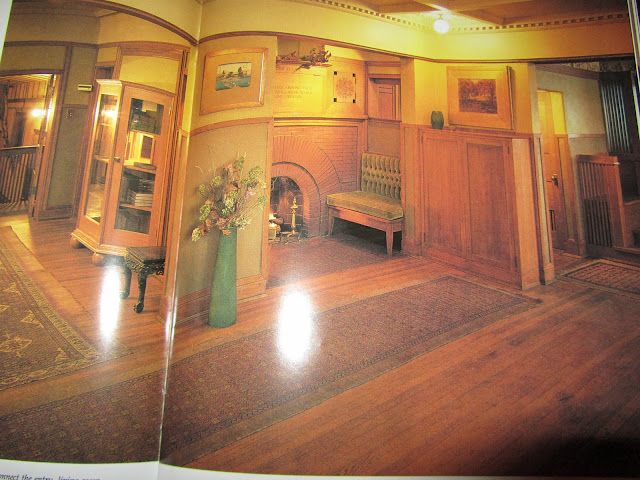 Living Room with Inglenook (notice the curved fireplace, which there are many throughout the home, in the  style of Louis Sullivan.) 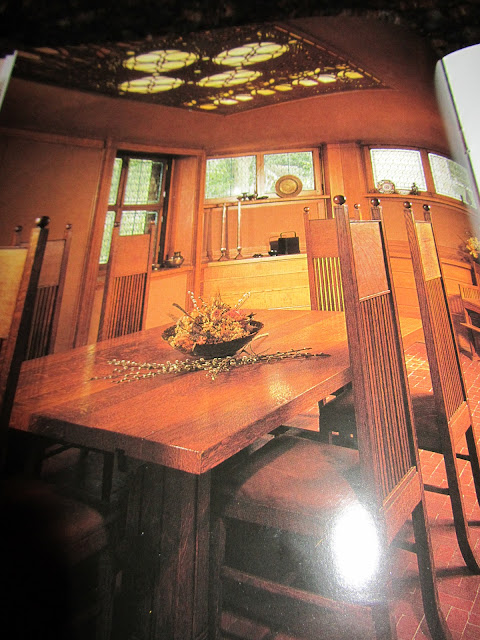 This is the larger dining room with all original furniture designed by Wright.  Take note of the overhead lighting, first ever indirect lighting.  He had the house wired when built knowing that a year and a half later electricity would come to Oak Park.
They say you can never go back, but my husband did when they were doing a complete renovation.  He walked in on them painting his beautiful oak moldings.  My daughter and I also went back two years ago when it was up for sale, liking what they had done with the layout, but not liking the white moldings in a Prairie Style home.  They are so many knockdowns in our area, but just last year our old house was granted historic status so it will be around for many lifetimes.
*I apologize for the flashes in the photos.  They were all taken from a booklet and could not be obtained online.  Frank was a minimalist and did not care for flowers in the house or on tables.  He commented on some of his furniture that he designed that if you sat in it long enough you would have black and blue marks.  He experienced a severe mid-life crisis, leaving his family, chopping up the above house to rent out and accommodate his family, eventually becoming an apartment rental for sixty years until it was restored beginning in 1972 taking fourteen years to complete,
Posted by Gatsbys Gardens at Friday, September 03, 2010 13 comments: Links to this post